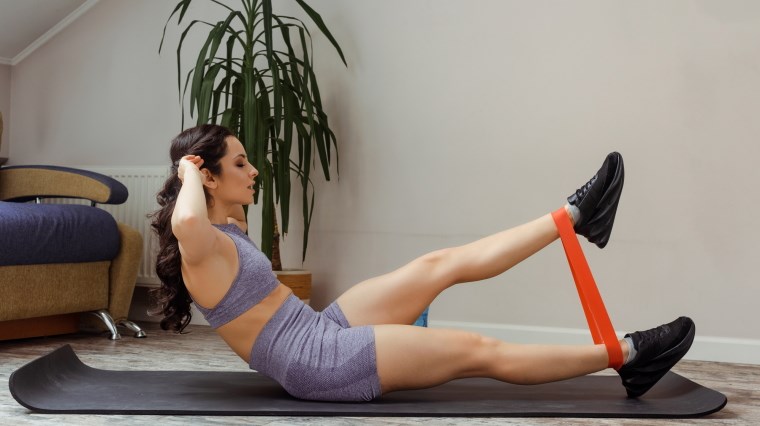 Joining the resistance band movement is easier than your think and there are plenty of reasons why gym goers and home gym enthusiasts, whether beginners or seasoned athletes are including them in their gym equipment arsenal.

Most of these body-sculpting exercises use a loop resistance band like those from Blackroll and all of them place emphasis on toning and strengthening your glutes. Your glutes are a powerful muscle group that is used for everything from lifting your shopping or toddler, sitting, standing, jumping, walking and running. No matter your lifestyle, your glutes play a star role.

The maximus, medius and minimus are the trio of glute muscles we’re targeting. Keep in mind that your glutes stabilise your body during activity and help you maintain a healthy posture, so it’s worth including a workout that strengthens these muscles more specifically – and a resistance band is the perfect tool for exactly that.

All you need to get started is a loop resistance band, a little floor space to set up your instant home gym and an exercise mat if you’re keen for the whole set-up. 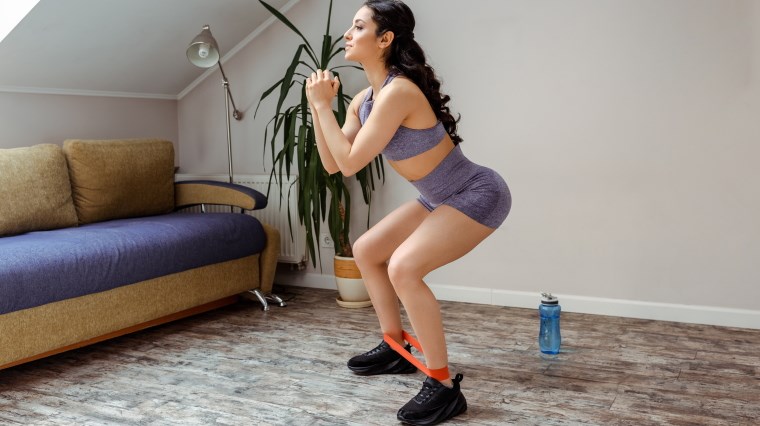 It’s no secret why the 30-day squat challenge took off with squats virtually being an all-in-one lower body workout. Standard squats activate your glutes, quads, hamstrings and core, using your bodyweight as resistance to help tone and strengthen muscle. Throw in a resistance band and not only can the challenge increase, but you can complete the movement with more control and guidance to maintain proper form.

Resistance bands help maintain tension through the entire exercise. This beginner banded squat starts with a loop resistance band around the ankles, but for more intense activation of your glutes, position the resistance band higher up your body – slightly below your knees, slightly above your knees or to the mid-thigh. The further up, the higher the intensity.

Your spine should remain in a neutral position (without hunching) to avoid injury and your ankles, knees and hips should remain aligned. Improper form may cause your knees to cave inwards and lose stability - looping the resistance band closer to your knees can help prevent this. From heel-to-toe, keep your feet firm on the floor, allowing you to power upwards with your rearfoot to midfoot. 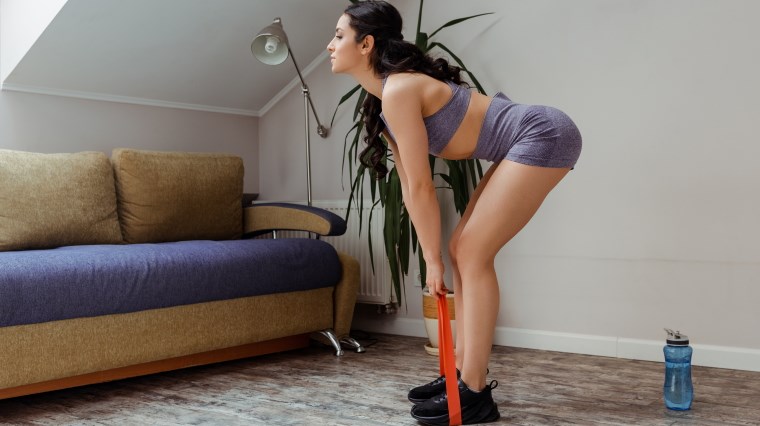 The deadlift is a popular compound exercise (an exercise that engages multiple muscle groups simultaneously). They put your quads, hamstrings, glutes and lower back to work while also activating your core and upper back to help stabilise the motion.

Traditionally deadlifts are performed with free weights such as dumbbells and weights including kettlebells and barbells. Trading these free weights in for resistance bands ensures a safer workout (particularly for beginners working on proper form) and is gentler on your joints and spine without skimping on the muscle strengthening benefits.

In barbell, dumbbell or kettlebell deadlifts, the lowest point is the most challenging, when your body and the weight is closest to the ground. Here you’re fighting gravity at its strongest, so lifters must select a weight they can handle with control at the lowest point. This is called a strength curve – when the force of the weight feels lighter and requires less muscle tension as your muscles extend.

If you start with the resistance band taut at its lowest point, the banded deadlift applies more consistent pressure to the muscles involved in both the lower and higher position of the deadlift. In fact, it slightly increases the tension as the band stretches and you take an upright position - providing a more balanced workout to develop your muscular endurance.

The banded deadlift is a hip-dominant exercise, meaning the movement is based on the hip-hinge action of step 3 unlike the squat in which your knees play more of a part. It helps to visualise your hips as a hinge as you push them back into the space behind your body and keep your knee bend minimal.

Keep a neutral neck (unlike the model) as if a rod was placed between your tailbone and neck, ensuring your spine and neck stay in line. In the starting position of point 1, the tension of the band should feel firm to ensure it provides resistance throughout the whole movement as you extend your body upright. Most of the ‘weight’ of the resistance band should be applied to your thighs, not your back. 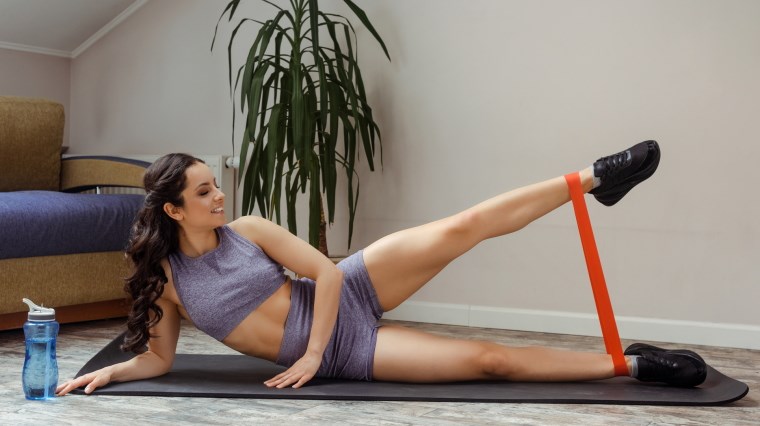 Side-lying leg lifts activate your glutes, hip abductor muscles and core while lying down, but don’t think this means they’re going to be a breeze. The strength gained from these exercises can be applied back into your sport – and that includes glute strength and core strength to improve overall stability and back strength to promote a healthy posture and reduce your risk of injury.

Side-lying leg lifts can improve your muscular endurance and give you more toned, flexible hips. Team this all with a resistance band to add tension and difficulty.

Try to maintain proper form throughout the exercise with chin tucked in and body forming a straight line, with hips aligned and legs extended. Proper body alignment and keeping your core engaged during the exercise will help avoid stress to your back. Your knees should be relaxed and not locked. Don’t think higher is better - only lift your leg until tension can be felt in the obliques or lower back. 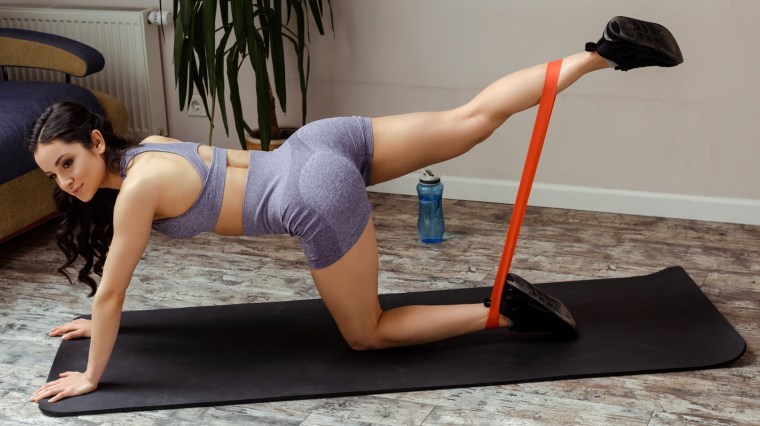 Like the side-lying leg lifts, the tabletop glute kickback is a glute-busting workout that focuses on this powerful muscle with multiple benefits including improved strength and posture.

Your hamstrings and hips are also activated in this lower body workout and by including a resistance band, you increase the ‘feel-the-burn’ factor acting on your glutes and legs.

Focus on maintaining the stability of your upper body and hips during the exercise with torso stationary throughout. Your palms should be firmly on the mat to help keep you supported and prevent your shoulders from shifting during the movement.

At the full extension of the kick there should be a straight line between your head and heel. It can help to visualise pushing your heel against the wall during the exercise. Keep your neck neutral and ensure that your back doesn’t sag uncomfortably. 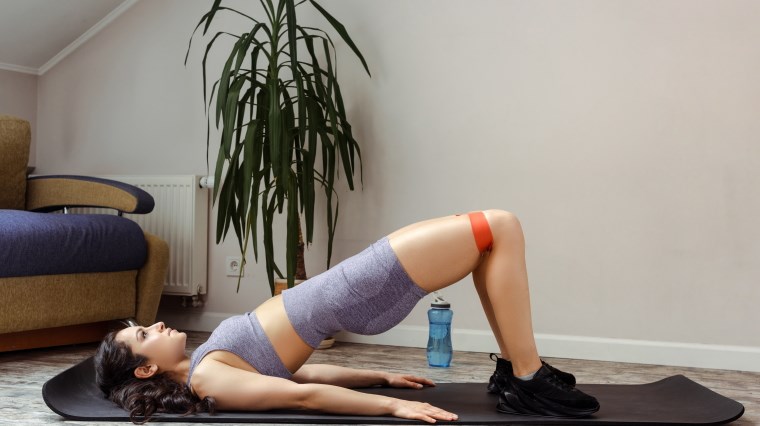 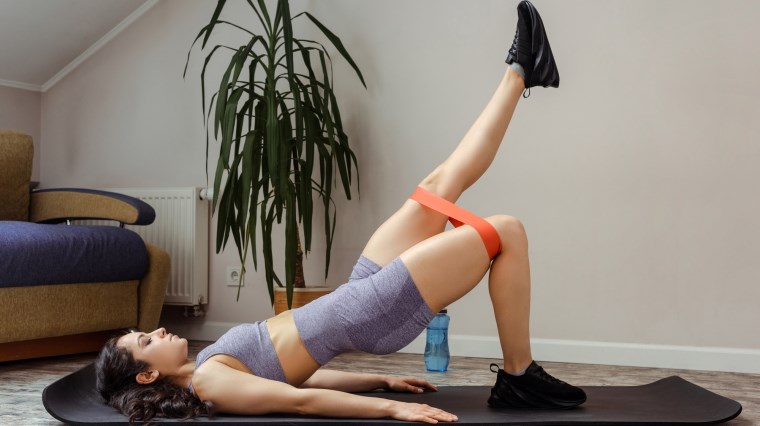 You may recognise the resistance band glute bridge from the bridge pose (Setu Bandha Sarvangasana) in our 6 rejuvenating yoga poses you can do in bed blog. Here, we up the intensity with movement and increased resistance to isolate the glute muscles. The addition of a resistance band allows you to target your glutes more precisely with increased tension, boosting the strengthening benefits.

Glute bridges can be used as an exercise on its own or as a warm-up to prime your glutes for more strenuous or prolonged physical activity. They’re a fantastic workout for people with desk jobs to increase the mobility of the hips and build strength of the lower back.

To increase the difficulty, we’ve included the banded single leg glute bridge variation as an optional step that engages your lower back and hamstrings as well as providing a glute-sculpting workout.

Maintain tension between your knees and resistance band throughout the exercise to avoid your knees caving inwards as you return to the starting position. Push your heels firmly to the mat to fully engage your glutes. Only elevate your hips as high as you can without feeling the weight being distributed to your neck and shoulders.

We recommend seeking the guidance of your personal trainer to perform resistance band exercises safely, effectively and to create a training plan that caters to your fitness level and goals.