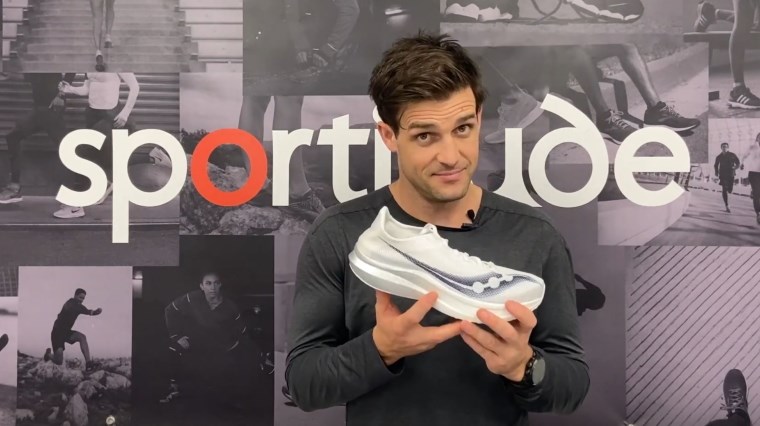 Josh reviews the highly anticipated Saucony Endorphin Pro+, a road racing shoe that weighs in under 200 grams to make quick work of everything from your 5K road runs to your next marathon. It's virtually identical to the Saucony Endorphin Pro 2 except for an entirely new upper design for a faster, lighter feel.

A weight-saving yet durable outsole provides protection for the PWRRUN PB superfoam. This midsole technology delivers an energetic and bouncy sensation underfoot. When paired with the carbon-fibre plate, it’s a game-changing recipe for the responsiveness and speed that elite racers crave.

Inspired by track spikes, the upper has a minimalist design that partners smoothly with efficient runners seeking to put faster finishing times in their future. A soft suede lining and unbelievable breathability elevate the comfort during high-speed performance and endurance racing.

Hi guys, Josh here from Sportitude Running and it is shoe review time. It's going to be a fast and exciting shoe review because we are talking all things Saucony Endorphin Pro+.

This shoe has just landed in our warehouse and there's been a lot of hype about it for a few months. We got a phone call from Saucony about 4 months ago saying, “Hey, we're going to do the Pro and we're going to do it in a lighter package. Would you be interested?” and we said, “Yes, yes and yes!”.

Let's firstly talk about what this shoe is and why it even exists in the first place. It is a race day shoe, so it's designed to go fast anywhere from 5K road runs, 10K, half marathon to your marathon distance. However, it's also designed to push those distances being half and full marathons for endurance athletes. 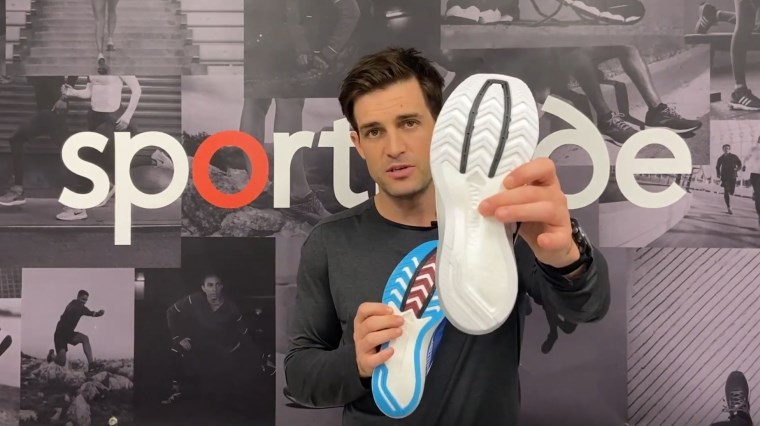 We'll talk about the outsole first. When I hold up the Saucony Endorphin Pro 2, you can see that the wall of the outsole covers the whole border of this shoe. There's elements of the exposed PWRRUN PB and we haven't had any issues with the wear pattern on the Endorphin Pro series.

Over time this shoe will obviously wear down a little bit but it's been a durable, honest outsole. I've liked what they've done. They've reduced weight but they've produced a protective layer underneath that PWRRUN PB. 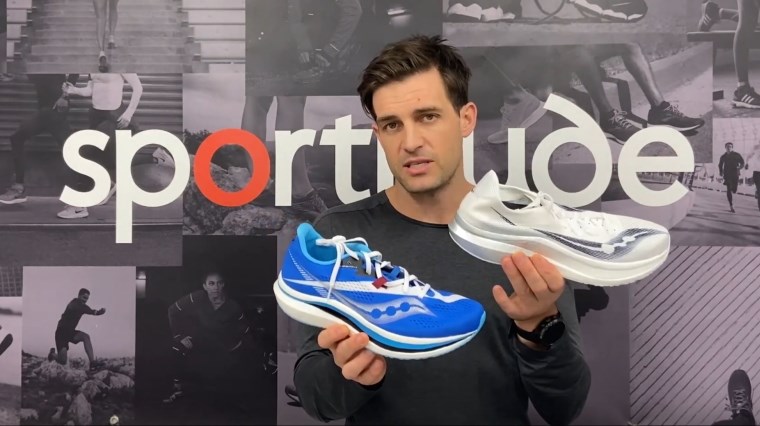 Coming to the midsole, again there’s no surprises here. Nothing has changed, it's the exact same technology. We have a 35.5mm heel and a 27.5mm forefoot for a variance of 8mm. There is no change regarding the PWRRUN technology. It's very light, bouncy and incredibly responsive.

Like the Saucony Endorphin Pro 2, we have a carbon plate on offer and it has the exact same positioning from heel-to-forefoot. It dips down through the midfoot to that forefoot and has a nice, aggressive dip towards the toe or your metatarsal region, so you get that engagement with your forefoot to generate that snappy responsive feel as you toe-off. 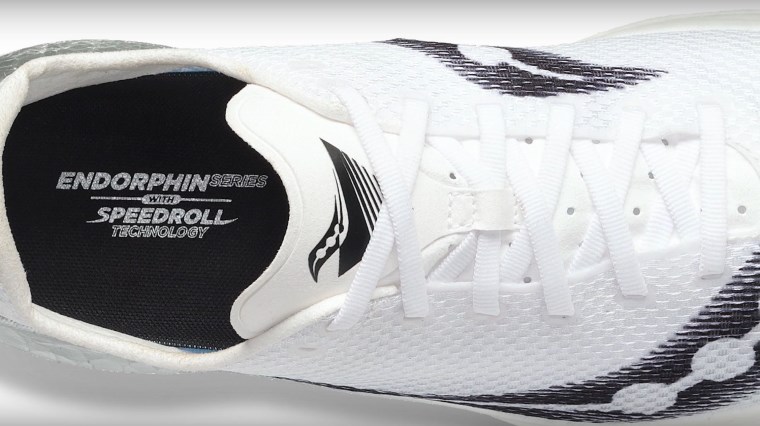 All the change is in the upper, no surprises there. The outsole and midsole are all the same but what we have up top is an incredibly lightweight system. Saucony’s head office essentially wanted to make a racing shoe with that spike fit and feel.

You probably think that difference in weight isn't a whole lot and to be completely honest with you it's not. I don't feel that the majority of athletes are going to run much faster in the Endorphin Pro+ compared to the Endorphin Pro 2, but the important thing when selecting a racing shoe is comfort.

If you find the upper of the Endorphin Pro+ to fit you, hug you and contour the shape of your foot a lot better, you're probably going to run a little bit more efficient and faster in it. On the flip side, if you find the Endorphin Pro 2 to hug you in the right areas up top and give you a more contoured fit, then this might be the shoe that you should lean towards when you're comparing apples for apples.

The other shoes that do fall under that 200 gram mark are your Nike ZoomX Vaporfly Next% and your Asics MetaSpeed Sky with the full-length carbon plates on offer.

One piece of feedback with this upper is that being so light, the tongue is a little bit thinner. There is no gusseted tongue. I felt conflicted with that because when it comes to racing shoes especially of this order, I like to just see a little bit of support up top, but again this shoe is about reducing the weight.

If you happen to be a really efficient runner and you're hunting down those PBs, this should be a shoe you could be considering for those road races. However, if you want a little bit more of a lockdown on top of your arch the Endorphin Pro 2 does provide it.

I mean that because the lacing system structure ties the eyelets down to the medial side of the joinery from the upper to the midsole, and the same thing goes on the lateral side. It's not intrusive, it's not heavy and it's a slightly more locked in midfoot in the Endorphin Pro 2.

Breathability wise, I don't think there is a better racing flat in the market at this point in time right now that is going to breathe as well as the Endorphin Pro+. This shoe is crazy light. 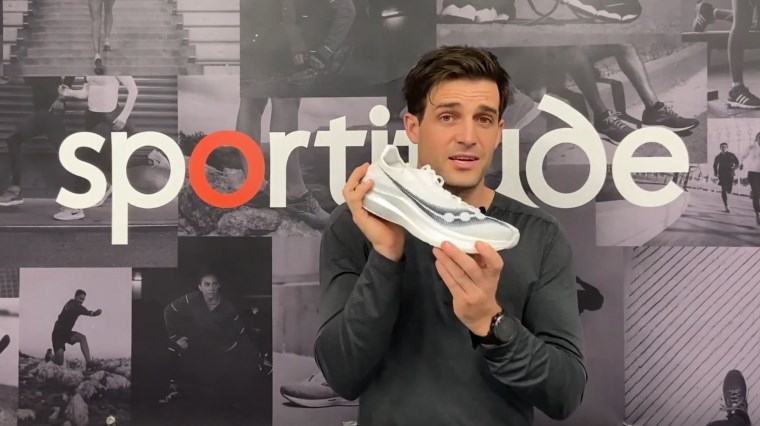 In summary, the Saucony Endorphin Pro+ is a very exciting shoe. Getting under that 200 gram barrier is a great achievement for a brand but not doing it to the point where they're sacrificing too much with this shoe.

All the changes are in the upper with a crazy light, very breathable system up top. However, the success of the Endorphin Pro series has been in that PWRRUN PB and the carbon plate midsole. Not changing that is a good thing, but a subtle iteration with that upper is only going to yield very good results for all those Saucony lovers out there.

Please subscribe to the Sportitude YouTube channel if you haven’t already done so to stay notified and we'll keep pumping out shoe reviews for you the running community.

Until next time stay safe, be kind to one another, happy running, keep chasing those PBs and we'll see you next time. Take care.