How To Improve Your AFL Kicking Technique By Yourself 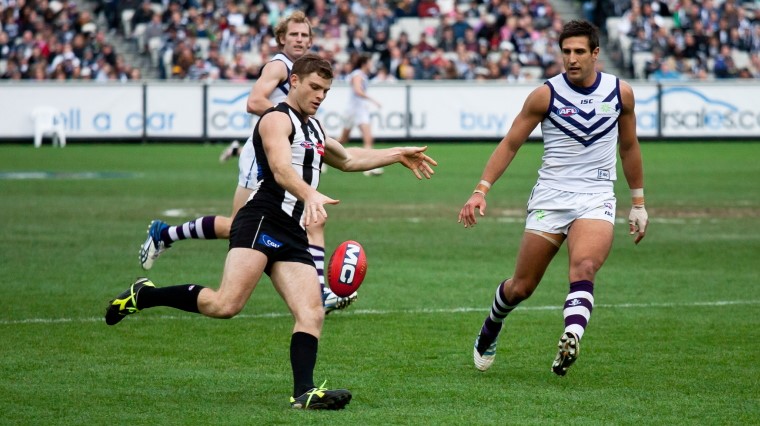 Kicking with control, distance and speed is the most critical skill you'll encounter in Aussie Rules. The drop punt is the most basic and frequently used kicking technique in Australian rules football – allowing your team to remain in possession of the football when targeted accurately and creating opportunities to gain the greatest distance.

Mastering the drop punt by practicing AFL kicking drills by yourself is essential to build the foundations for more complex and specialised kicking styles like the torpedo punt and cheekside punt (‘banana kick’).

Although you'd love to have access to your coach and team around the clock, knowing the ins and outs of basic technique and learning how to identify an effective drop punt will allow you to improve your kicking skills on your own, even when your footy family is out of reach.

How to drop punt

1. Set up: Line up your body with hips square with the desired direction of the football. Position your head slightly slanted over the ball.

2. Grip: Hold the ball vertically with the nose or ‘cross’ end of the footy facing the ground at a slight angle, and laces facing forwards. Spread hands evenly on either side of the ball, with thumbs pointing naturally towards the top of the main seam without touching it, about three quarter the way up the laces. A proper grip (controlled without squeezing) translates to effective stability and allows gravity to work in your favour in the following steps.

3. Guide the ball: Lower the ball with the guiding hand (the equivalent hand to your kicking foot). The non-guiding hand is used solely to support the ball until this point. The football should be positioned in front of your kicking leg, from thigh to just above knee height.

4. Ball drop: Keep the ball straight and release when the kicking foot is raised into the kick. This will allow time for the kicking foot to build up power before impact. During the kick your non-guiding arm should swing up and out to the side in an arc motion, keeping about in line with your shoulder to improve balance.

5. Impact: Create a stable and firm kicking platform by fully extending foot and ankle on impact. Like a fist hitting a boxing bag, you want to ‘punch’ the ball firmly with your foot for the best outcome. Impact should take place at the higher zone of the laces, with the lower third of the ball contacting your boot. This will minimise injury risk, improve kicking efficiency and create a quality sweet spot.

6. Follow through: Fully extend your leg in front of your body after impact for optimal power, naturally following the path of the football with toes pointing straight towards the target.

How to identify an effective drop punt

Being aware of sensory cues will allow you to identify a correct impact, know when to adapt your technique and to learn how to consistently replicate effective kicks. Recognising this immediate sensory feedback is particularly valuable when performing solo AFL training drills to know when you’re on track.

After an effective impact, the football will spin backwards end over end quickly, creating distance and a consistent flight trajectory. Getting a feel for how to accomplish this through repetition is a good starting point, allowing you to replicate and identify it in future.

The kick shouldn’t feel like it required a hard effort to initiate. The sensation of the football on the boot will feel light and not cause substantial shock through the foot. You should feel targeted tension and stretch throughout your muscles during various stages of the kick, such as the thigh as the lower leg extends into the kicking action.

When the football has correctly contacted with the foot, you’ll be rewarded with a satisfying and crisp ‘thud’ sound.

Everyone’s kicking technique and coaching methods are different, so it’s essential to find out what works for you.

Some coaches and footy elites emphasise the point of impact (how the football contacts the boot) as being the most critical step in performing an effective drop punt, and work from this point backwards to identify areas in need of improvement.

Other professional players believe that the influence of the ball drop (the transition of the ball between hand and boot) is underestimated in regard the quality of the kick and whether the sweet spot is successfully struck.

Guiding vs dropping the ball straight

Although some players recommended dropping the ball from around thigh height, you may find greater success dropping the ball closer to the foot (e.g. only slightly above your knee) to improve your rate of accuracy and leave less room for error.

Curved run up vs straight run up

Curved run up versus straight run up is another area of debate – where a curved run up is believed to elevate foot speed prior to impact and ball speed following impact due to the greater hip leverage required.

On the other hand, a straight run up is debatably more precise and forgiving. Many elite players stick to straight run up when kicking distances of 30 - 40m and under. However, they may commit to the riskier, slightly curved run up to ‘open the hips’ in circumstances when it’s critical to gain distances approaching 60m.

Remember that this is a guideline on the fundamental mechanics of kicking and even among professional players, the nuances of a successful drop punt vary considerably between individuals. However, there are elements that remain consistent to the winning formula of AFL kicking such as effective leg acceleration and a firm foot at impact.

Practice is essential to master the standard drop punt as well as any deviations you choose to make the drop punt your own. Keep your footy skills sharp by putting the theory behind proper kicking technique into practice with AFL kicking and training drills you can do by yourself, particularly when your team is inaccesible.

As sloppy habits tend to stick, prioritise quality practice to build up effective muscle memory throughout pre-season and beyond. This will allow you to kick with intention and instinct when playing under pressure on game day in the future.