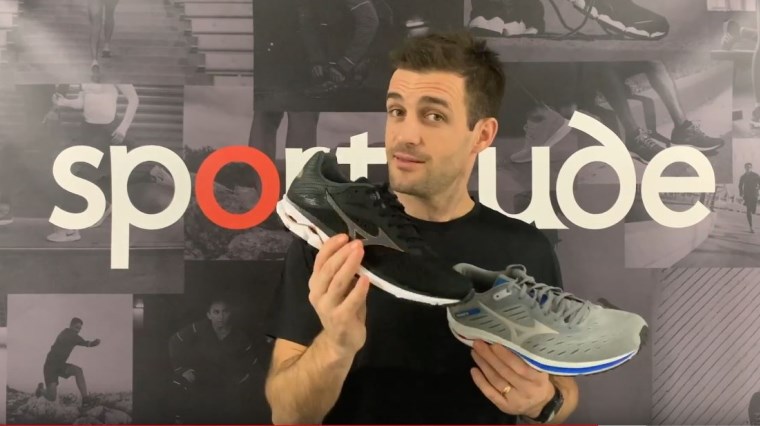 This next evolution delivers heel striker-friendly engineering like its predecessor the Mizuno Wave Rider 23, but its executed in a way that also works in harmony with midfoot and forefoot runners craving comfort for long miles out on the road. Full ground contact creates a reliable connection with your running surface for smooth and comfortable transitions no matter how your foot strikes the pavement at the first point of contact.

A deep, orthotic-friendly upper creates a structured fit, with an internal heel counter hugging your rearfoot in friction-free comfort.

Hi guys, Josh here from Sportitude and today we’re doing a shoe review on the new Mizuno Wave Rider 24. This shoe has a whole new take on engineering with regards to how Mizuno executed the outsole, midsole and the upper of this shoe. There’s a lot of changes about this shoe that I really like, especially full ground contact.

Like all my reviews we'll talk all things outsole, we’ll dive into the midsole and talk about the upper. We’ll compare it to where it was previously with the Mizuno Wave Rider 23 and profile the runner that should be considering this shoe. Who knows it might be a shoe for you so let's get stuck in.

First things first, let's talk about the foot type that could consider this shoe. Technically it is a neutral shoe. We're talking about the runner that comes down on the heel at first point of contact with the ground and then comes through midstance transition, where your foot and the weight of your body starts to transfer over the middle of your shoe.

It’s a runner that tends to stay balanced and straight. In foot terminology, that means a potentially higher arch. We classify this type of running as an under pronated or supinated foot type. You can see a little bit of real estate between the arch and the ground and often the pressure can be on the lateral side of the foot.

However, if you have a neutral foot it sometimes can look like this as well, where the arch does flatten out  but the main pressure is through the central part of your foot. You’re still going to be toeing off at the second to third metatarsal on the exit of your gait cycle.

We're not looking at someone that's going to overpronate excessively and have a little bit of extra roll through to midstance because this shoe won't hold up well for that specific foot type.

Also profiling the runner, it is a lightweight mileage shoe. It is designed to last out on the road. It's not quite as cushioned as the Mizuno Wave Sky which is the shoe that sits just above this in the Mizuno running family. However, the Mizuno Wave Sky can be a little bit heavier and bulky for some runners out there.

The Mizuno Wave Rider is targeting the runner that wants a lighter shoe on their foot but still has plenty of protection as well.

I want to touch on the fact that the Wave Rider franchise has still been Mizuno's number one running style for the best part of five plus years. Globally it does quite well for the brand so when they make subtle changes in this shoe they don’t want to go back to the drawing board too much.

However, you need to make advances with your technology to either stay ahead of the game or keep up with the game because there's a lot going on in the running shoe industry now.

When I got the Wave Rider 24 out of the box I was super excited to see that it has full ground contact. In the Rider series for a number of years now, when you're looking at the section between heel engineering and forefoot engineering, there’s a thermoplastic beam that works with the Wave Plate that can be a bit rigid and noticeable through midstance. It can cause a little bit of disconnect through the midstance of the runner’s gait cycle.

It is there for a specific reason, to help with that deceleration through midstance for heel strikers. However, for a lot of runners that are midfoot runners or forefoot runners it wasn't that comfortable.

Looking underneath, whether you’re a heel striker, midfoot striker or even forefoot runner you're going to have a nice plush purchase with the ground which is much more comfortable.

When we're selling shoes on the floor at Sportitude we want to look at that first entry point first up and see where we need to have those high-wear areas. The great thing about this shoe is it caters to not only a heel striker but a midfoot runner or even a forefoot runner could find this shoe comfortable as well.

If you’re looking at the flex grooves through the forefoot, essentially it has two and half. It has enough flexibility to give you that assistance in the last phase of your gait cycle.

The Wave Rider 24 has a little bit more flexibility which I found more compliant with my running gait and I know that a lot of other runners will enjoy that extra flexibility through the forefoot.

Coming through to the midsole where most the magic has happened in this shoe. Mizuno have engineered a new cushioning system called Mizuno Enerzy. That wedge sits underneath the Wave Plate and at the back of the shoe.

It’s targeting that heel striker that's looking for extra dampening. The Enerzy cushioning system is lighter and softer. Mizuno have done their testing and it is more responsive. I’m not going to put a number on that because this is all in-house Mizuno testing but the energy return on Mizuno Enerzy is through the roof.

However, after putting it on the foot I didn’t feel insanely poppy compared to the Wave Rider 23, but it is a more consistent feel underneath the heel. When my foot comes down it feels plush and stable when I transition through my gait cycle.

Keep in mind I’m a midfoot runner. I'm not a true heel striker so I only get a little bit of feel of that Enerzy cushioning system through the midstance phase of my gait.

For the offset of this shoe we're talking a 31mm heel and 19mm forefoot, so a 12mm heel-to-toe gradient.  It’s generous on the whole scheme of things when we're looking at the running shoe market. Brands are trending more towards that 8 – 10mm offset.

However, since that cushioning system is so soft at the back of the shoe, if they happened to run it in a 10mm or 8mm drop it may feel less than that because it has quite a bit of dampening.

The theory being that if it’s a 12mm offset it'll probably run like a 10mm offset due to being softer at the back. It certainly didn't feel that elevated on my foot and that could potentially be the reason why.

Coming through to the upper of this shoe and probably my favourite feature regarding the comfort aspect. Obviously, there's a lot going on underneath the foot which I appreciate and I like what they've done.

However, stepping into this shoe it feels more comfortable straight off the bat. I'm not going to lie, I liked the Wave Rider 23 but I didn't love it. I could see who would enjoy this shoe, but it wasn't a shoe that I happened to throw into my rotation over the last six months. I could have and it probably would have worked A-OK but after a handful of runs in the Wave Rider 24 I can certainly see it making its way into my rotation. It’s a lightweight shoe with cushioning and protection.

The reason I like the upper so much is it’s more comfortable around the back of the heel. The internal heel counter in Mizuno running shoes has been its biggest feature in the upper for several years. It’s a very deep, secure and supportive structure at the back. It’s great for orthotics because there is a lot of extra play with the amount of depth you have on offer.

Coming through to the midfoot area of the Mizuno Wave Rider 24, they haven't stitched in the logo which is great. You don't want to add that potential irritation on the foot. They’re keeping the logo nice and clean and I like the cosmetics of it as well.

There’s good lockdown in the midfoot which is great. As you come through to the forefoot it’s slightly rounder at the front half of the toe box. It gives a little bit more wiggle room at the end of your toes which is very comfortable as well.

Covering the bases, they do come in widths which is great. In men's it’s available in a D which is standard and there is a 2E on offer as well. In the ladies’ they're rolling out a B which is standard and D width which is a little bit broader. I love it when brands call out widths. It makes life a lot easier fitting shoes down on the shop floor.

There you have the guys, the Mizuno Wave Rider 24. It’s a lightweight neutral high mileage running shoe from the Mizuno family. It’s a great update. I love what they’ve done with this shoe and who knows it could be the shoe for you.

Please subscribe to the Sportitude YouTube channel if you haven’t already done so. If you have any questions on the Mizuno Wave Rider 24 or any other shoes please contact our Sportitude shoe experts.

Until next time happy running. We'll see you soon.