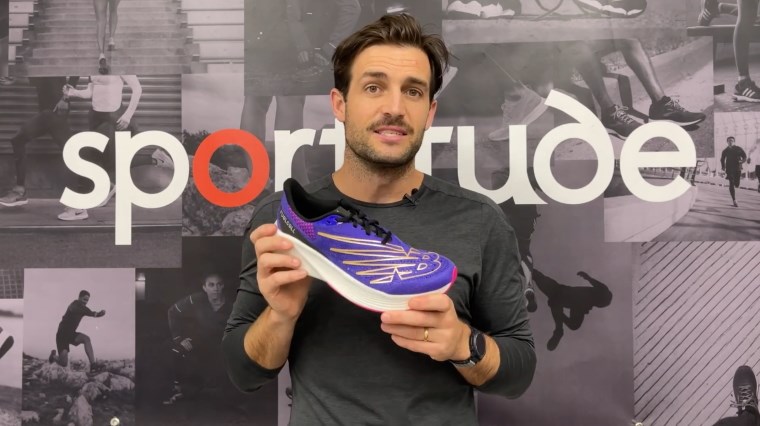 Josh reviews the carbon-plated New Balance FuelCell Elite v2 racing shoes that prioritise a lightweight and responsive feel to outrun competitors in 5km, 10km, half marathon or full marathon events. New Balance have strategically shed non-essential elements and support to achieve an intuitive, race-ready feel and fit that’s engineered for a fast and forgiving ride from the ground up.

When put side by side with the New Balance FuelCell Elite, the outsole of the updated model is more simplistic but effective. It provides traction for high-speed performance in a weight-saving package - keeping the FuelCell midsole exposed while providing protection and stability with a wide, reinforced forefoot.

New Balance have transferred over the energy-returning FuelCell technology of its predecessor for a consistently plush ride but have re-engineered the stack height – being on a higher platform with a reduced heel-to-toe gradient. A more aggressive angle to the full-length carbon plate creates a smoother, snappier and more effortless transition from midstance to toe-off - making it easier to generate speed.

By not extending the laces as far down as the previous version, the forefoot feels roomier without changing the fit of the popular first edition, maintaining the secure and breathable ride up top.

Check out the full review with transcript below.

It is the middle of May 2021 and this racing shoe has just landed in our warehouse. I am super excited to get stuck into this review because I love what New Balance have done with version 2 in comparison to version 1, the New Balance RC Elite.

In today's review we're going to be talking about the outsole, midsole and the upper, profile the runner that could be considering this shoe and show you some variances or comparisons between v1 and v2.

We’ll give you all the information at home that you need to potentially throw this into your race day collection. Without further ado let's get stuck in. 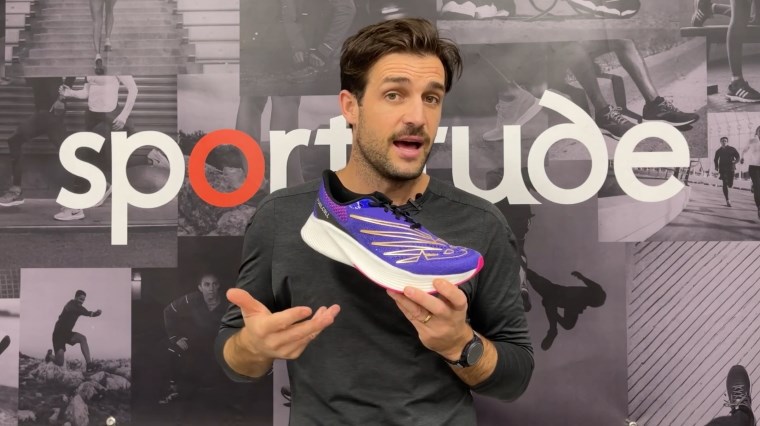 First things first, let's dial in on the fact that this is a race day shoe so it's going to be lighter and it's going to be more responsive. Elements of this shoe have been taken out to produce that outcome.

When we're talking about racing shoes, we don't get hung up on what is happening underneath the body regarding support because naturally you're going to be sacrificing support to generate that fast fit and feel under your body.

Whether you're a mild supinator, neutral foot type or a mild overpronator, it's more to do with your body's tolerance to lightweight shoes and whether you can sustain having that lack of support underneath your foot from anything from 5 kilometres to 10 kilometres, half marathons or full marathons out on the road. 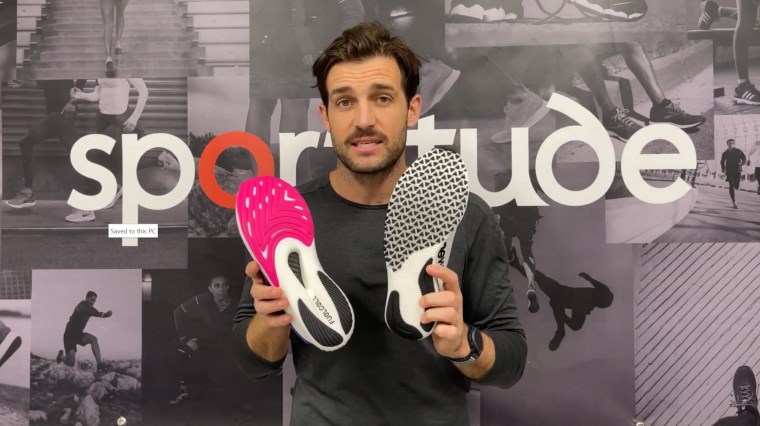 When we look at the outsole of the New Balance FuelCell RC Elite v2 there's a simplistic approach to an outsole technology. They had a quick turnover with v1 to v2 and when you compare it to the v1 which landed about six to eight months ago, there's quite a bit of difference.

In v1 New Balance used a technology called Dynaride outsole so this was an extremely grippy compound underneath the foot and the feedback was so great with this outsole that it was quite a gutsy move for New Balance to go to the new outsole of the FuelCell RC Elite v2 which is quite different. The main reason they did is more to do with the midsole which we'll get into in two ticks.

With the outsole you've got that exposed FuelCell technology through the midfoot, a little bit of rubber through the back medial and lateral pods but mainly through the forefoot you have nice protection.

There’s plenty of good landing pad space for your midfoot and forefoot runners but there is enough traction underneath the foot to give you some confidence on the road whether it be a little bit slippery or dry.

I can vouch for the fact it's stable when you're turning on the road. In a couple of my test runs I took it out on the road and I didn't do some aggressive hairpin turns but certainly some 90 degree turns. At pace it felt nice and stable underneath the foot, so I have a lot of confidence with what New Balance had produced with the outsole. 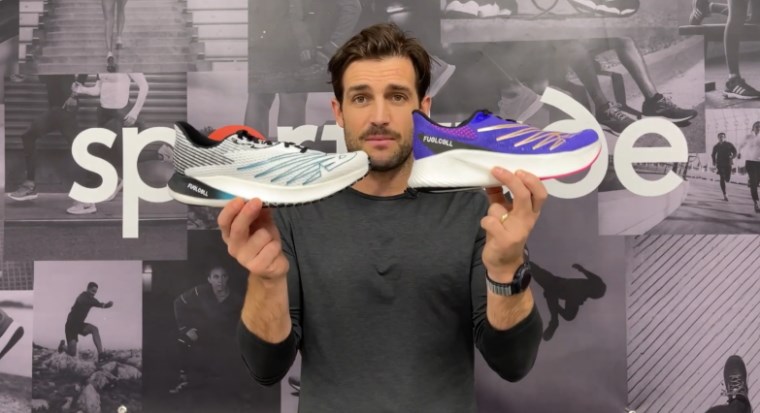 Most of the magic happens in the midsole because we have a full-length carbon plate running from the heel right through to the forefoot. However, they have increased the stack height with the New Balance FuelCell RC Elite v2. New Balance have gone from a 34mm to 24mm heel-to-toe drop in v1 which is a 10mm offset and increased it to a 39mm to 31mm heel-to-toe drop in the v2.

Not only do we have an increase of stack, but we’ve also got a reduction in the heel-to-toe gradient. Being 39mm heel to 31mm forefoot, that's an 8mm heel-to-toe drop.

New Balance have not changed the compound of the midsole though, it is still their FuelCell technology. It is incredibly soft underneath the foot, so you get that element of cushioning. Also with that softness and in conjunction with the carbon plate you get a snappy responsive feel through the forefoot.

The main differences with the midsole is the increased stack height and the positioning of the carbon plate. The carbon plate in relation to where it's positioned in the forefoot and the heel is the same. You don't have to be a rocket scientist to understand when you increase the stack height something must change with that carbon plate, and it is the angle in which it dips from the heel through to the forefoot.

By making that carbon plate steeper you can provide a slightly more aggressive transition through midstance to toe-off. With this compound of foam, being the FuelCell technology it is a very effortless transition as you exchange through to your forefoot. New Balance have produced a very smooth transition by increasing the stack height.

The other biggest change with regards to the midsole is in relation to the lateral flare. In v1 it was quite noticeable they had increased the landing space on the lateral side. This was due to the fact they wanted to create a higher speed transition through to your toe-off and stabilise that function with the carbon plate.

You couldn't do that with v2 as much because if you did on a higher stack, it would provide a little bit of instability for the runner. Therefore, they've shaved away that lateral flare ever so slightly. However, by increasing the stack height and increasing the steepness of the carbon plate you can still get an insanely quick transition from midstance to toe-off and it's more effortless and not as noticeable which is a fantastic achievement. 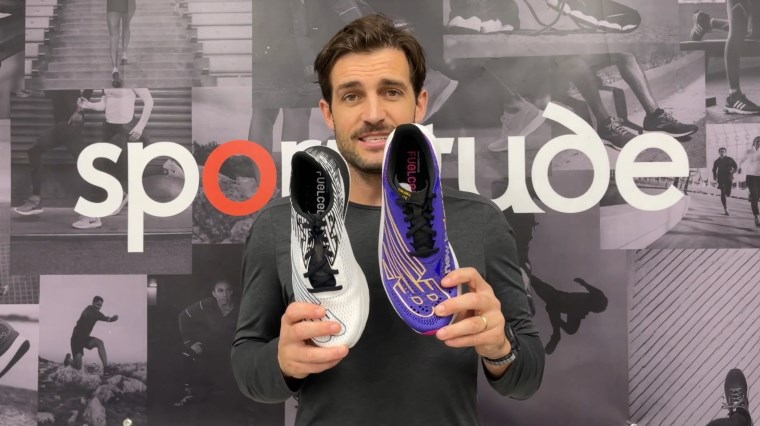 Let's talk all things upper with the New Balance RC Elite v2. Being a racing shoe, New Balance need to keep it as light as they possibly can but not sacrifice support.

There's a decent heel counter at the back of this shoe and there's no plastic structure that's been introduced into this set-up. It's more to do with the materials that New Balance have used at the back end, keeping it light but nice and stable so when you put your foot in, that heel feels locked-in which is fantastic.

Coming through to the midfoot I love what they've done. It's a secure fit on top of that arch so I felt like my foot was in the perfect position for what this shoe was doing for me underneath my body. My foot felt very stable and secure.

As you come through to the forefoot if you like the fit and the feel of v1 through that toe box you're going to love the fit and feel of the toe box in v2. There's not a lot that has changed with regards to the depth.

The biggest noticeable change is where the laces start and where they finish. In v2 the laces start in the exact same position, but they don't quite finish down as far as they do in v1. You get a little bit of extra space through that forefoot, but not to contradict what I said a minute ago. It's the same fit and feel through that forefoot, I just like what New Balance have done by getting the appropriate lockdown by not using too much of that upper to create it with that lacing system which is fantastic. 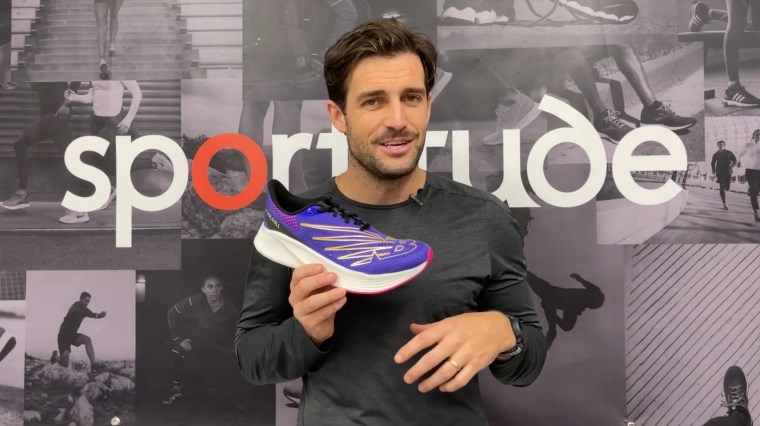 In conclusion the New Balance FuelCell RC Elite v2 is a fantastic update. By increasing the stack height to that 39mm heel and 31mm forefoot for that 8mm heel-to-toe offset, they have come just under what the World Athletics association have published as being the legal requirements for stack heights for your road racing so a big tick there.

Also, with the change regarding the steepness of the carbon plate from that heel to the forefoot it's providing an effortless ride underneath the foot. For me personally in running at the same speed in v1 and v2, it was much easier to produce that speed in the v2. That's exactly what you want - to be able to run faster at less effort.

New Balance have certainly executed that with the New Balance Fuel Cell RC Elite v2. If you have any questions with this shoe and the changes, they've made from v1 to v2 please contact out Sportitude shoe experts.

If you have some thoughts, theories or queries about the carbon plate industry let us know. We love hearing all your feedback and comments with regards to racing shoes.

Please subscribe to the Sportitude YouTube channel if you haven’t done so already and we'll keep pumping out shoe reviews for you the running community.

Until next time stay safe and happy running. Be kind to one another and we'll see you out on the road. Take care.