Hoka One One Bondi X vs Bondi 7 Comparison Shoe Review 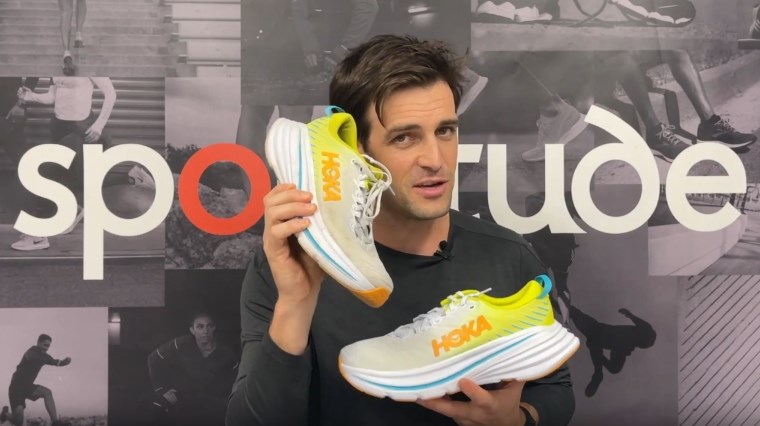 They cater to runners and endurance racers seeking high levels of compression and protection to go the distance without losing out on the carbon plate phenomenon that has taken the running world by storm in recent years. Compared to other full-length carbon-plated running shoes, the Hoka Bondi X trades speed and lightness for a plusher, more stable ride.

The durable outsole offers heel striker-friendly engineering with hard-wearing rubber placed underneath the rearfoot. In the midsole Hoka One One put their traditional EVA foam into play for consistent shock absorption to ward off fatigue during your next marathon.

An airy upper wraps securely to your feet, locking your rearfoot in place with a supportive heel counter so your foot won't slide forward as you pick up the pace.

For runners that want a shoe that goes all in on comfort and protection for long miles while giving you the snappy propulsion that comes with a carbon-fibre plate, the Hoka One One Bondi X is a worthy partnership.

This shoe has just landed October 1st in our warehouse and I am extremely excited to give my overview and review on this shoe because I've been running in my pair now for around four to six weeks. I've put in just over 100 kilometres in these and I have loved every single one of those Ks.

In today's review we're going to talk about where this shoe sits, why it even exists, compare it to the Hoka One One Bondi 7 and give you all the information that you need at home to potentially throw this into your shoe rotation. Without further ado let's get stuck in.

Before we dive into the Hoka One One Bondi X let's touch on the specs of this shoe. A men's size 9 weighs 300 grams and for a women's size 7 we're just under 260 grams.

This shoe is not a lightweight shoe, it's a max cushion shoe. However, it does have that full-length carbon plate. I'll dial into all the specs and details with this shoe today and at the end of my review I'll profile the runner that should be considering this shoe. 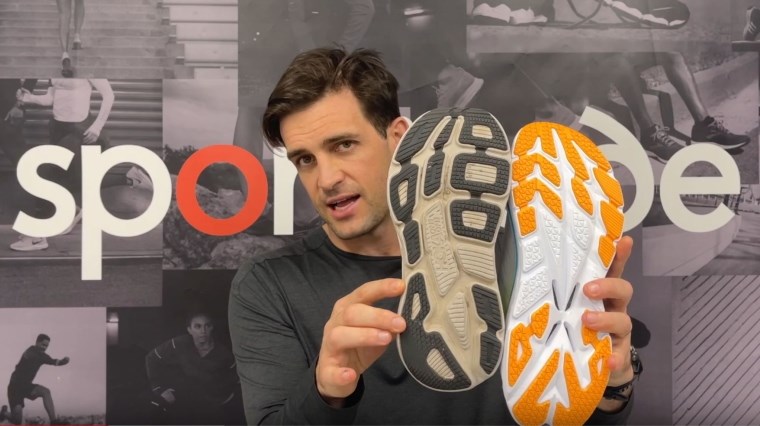 The first thing we'll talk about is the outsole. If I flip it upsidedown, you can see that Hoka One One strategically placed that orange rubber in those high-wearing areas, being the heel for that heel striker coming down underneath the body. As you come through to the forefoot that rubber covers the forefoot area to provide an element of protection as well.

Regarding my Hoka One One Bondi 7, it’s not too dissimilar. We have similar coverage with regards to the outsole at the heel and the forefoot. Right through the middle there's that exposed EVA. Playing on the Bondi X for Hoka One One, you can see the 'X' in those decoupled lines. Right through there you'll be able to get a bit of a glimpse of the carbon plate. 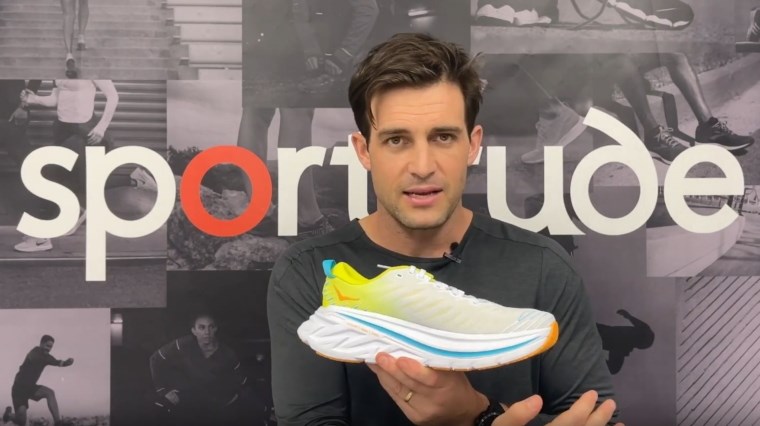 For the midsole, we have a max cushioned shoe as I said in the intro. Looking from the outside it looks like an incredibly high stack, higher than the regulations of 40mm. However, in the men's model it is a 33mm heel and a 28mm forefoot for a variance of 5mm.

Comparing that to the Hoka One One Bondi 7 which is a 33mm heel and a 29mm forefoot, there's only 1mm variance in the forefoot. The major reason that Hoka One One have dropped it by 1mm through to the forefoot is to get the full benefit of that carbon plate which we'll touch on in two ticks.

The cushioning system is Hoka’s traditional EVA foam and it's not overcomplicated. I wouldn't say it's a superfoam but it's certainly light and really plush underneath the body.

The main reason is because this shoe isn't designed to go crazy fast. You can still push the pace in it and you can still do some tempo runs but it's not a shoe that’s competing against your Nike Air Zoom Alphafly Next%, Saucony Endorphin Pro, New Balance FuelCell RC Elite or Brooks Hyperion Elite.

This shoe isn't designed to go as fast as those shoes. Therefore, the carbon plate starting to drop its angle further back towards the midfoot is to make the experience for that runner more seamless throughout the whole gait cycle. This is because the contact time is going to be a little bit higher. They need to provide a slightly more stable ride through the whole transition of the gait cycle.

Flipping to the medial side, there's nothing there that's going to suggest it's a guidance shoe. The carbon plate is going to offer a little bit of torsional stability through the midfoot region. When you're going through midstance you'll find that before you get to that engagement part of the carbon plate, you will feel stable on top of this midsole. Obviously it's a pretty generous surface area as well, with a lot of shoe underneath your foot. 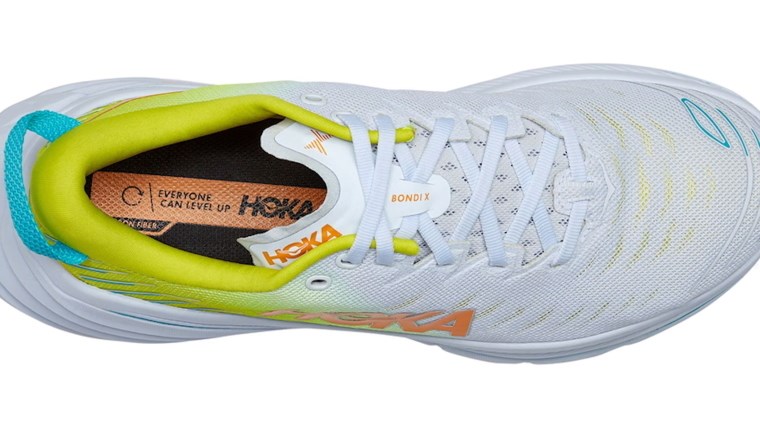 The Bondi X is 300 grams and the Bondi 7 is 303 grams. It's really hard to depict where that weight reduction comes from. It could be a little bit less of the outsole through the midsection or it could be the upper. I believe it is in things like the tongue and the execution of that slightly more breathable upper.

With your race day shoes or your tempo shoes, obviously there's considerable weight reduction of the upper. This still feels a bit like a traditional shoe up top. When I’m talking about a traditional shoe I’m referring to more of a lockdown experience through the upper.

I really like this shoe. It has a gusseted tongue so it really gives you that nice lockdown over the saddle over your arch region. It breathes nicely through the forefoot and the breathability comes through that thinner tongue so you get plenty of ventilation through your arch region.

Coming back to the heel counter, as we touched on a minute ago with the stack height it does look like a really high stack. However, being 33mm you actually sit underneath the wall of this midsole as it wraps up around that heel counter.

If you're picturing your foot sitting inside his shoe, you're going to have a little bit more of a wrap around the base of your calcaneus or your heel. By sitting in the midsole and also with an internal heel counter, you get a secure and stable fit and feel underneath the base of your heel.

When your foot comes down you're going get the compression from the ground up but also a nice stable grab around the base of your heel which is a fantastic engineering execution by Hoka One One.

The other thing I really like is the lining. Brands sometimes overdo it and in this running shoe I believe they have it absolutely perfect. There’s a little bit of memory foam inside that lining and I didn't get any blisters from the first run.

I’ve done it with thick socks and thin socks like Steigen running socks. I've ran in them all and this shoe provided a really comfortable feel through the upper on every single run. 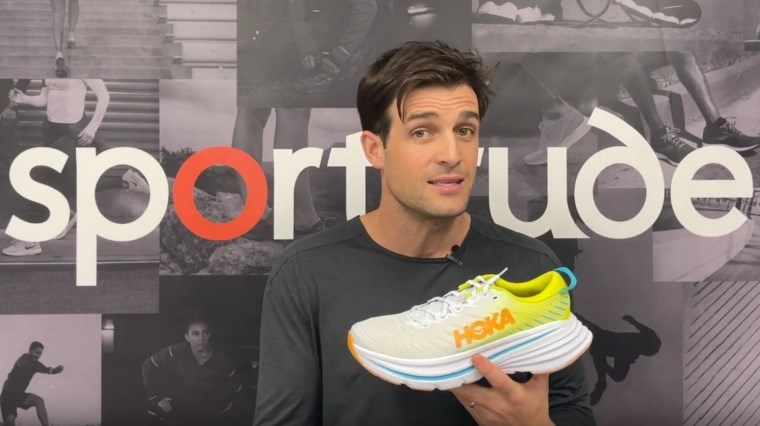 Let's talk about the runner that should be considering this running shoe. I've gone over the specs of this shoe and what it's all about with that carbon plate and the stack heights.

I believe there has been a gap in the market for the best part of five years where we've seen that carbon plate phenomena where brands are making lighter, faster and more snappy responsive shoes. It is so exciting for a lot of runners out there that are really chasing some seriously fast times.

However, there are runners that are looking to run a little bit faster, but might be doing their marathons or half marathons in a Hoka One One Bondi, or a shoe like a Hoka One One Clifton or a New Balance Fresh Foam More. They need an element of support and protection, but just can't get along with a lightweight, minimalistic shoe with either a nylon plate or a carbon plate and therefore they feel like they're missing out.

You can step into this shoe if that is you and you will experience a pretty similar feel to what those other runners are getting out of their carbon plate shoes. It is slightly heavier than the other carbon plate shoes which I touched on, however it's going to be stable and you're going to get that snappy propulsive feel through the forefoot.

I have used this shoe for everything from my easy day runs and up to 17km runs in this shoe. It was pure joy the whole time. I have done some progressive runs or I've pushed the pace and I got up to around about 4 mins 15s per kilometre and held that for about five to six kilometres.

It felt comfortable on the foot. It wouldn't be a shoe that I would be grabbing to go out and run a 5km PB or a 10km PB but I would certainly grab this if I was looking at maybe doing an ultramarathon on the roads or I might have been looking to push those longer runs out and my body was a bit sore.

The other market I think which will pick this up is your Ironman athletes, the runners doing either a half Ironman or full Ironman and have potentially been running in really cushioned, supportive shoes and feel like they're missing out. If you want a little bit more, put yourself in the Hoka One One Bondi X and you'll notice that there is a bit of push back with that carbon plate. 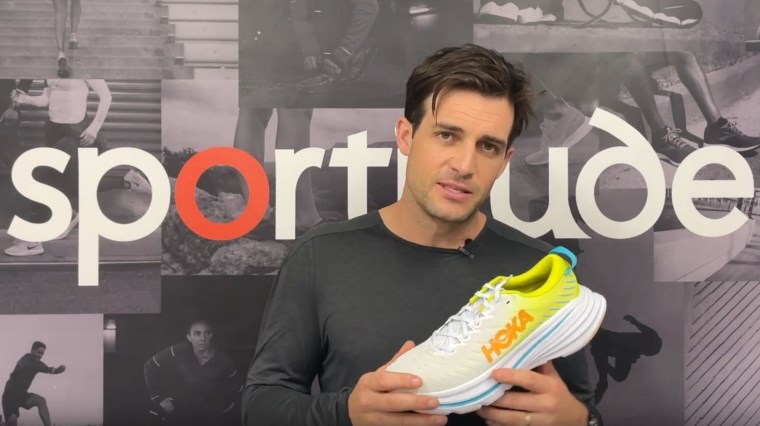 I really like what Hoka One One are doing in this space. It is a shoe that's going to sit alone. The only other shoe that I can think of that's going to compete against this is the New Balance SuperComp trainer which is coming out in a few months. It’s going to be good to see how that shoe compares to the Hoka One One Bondi X.

I have been a massive fan of this shoe and I've loved every kilometre in it. I’m looking forward to putting some more Ks in my pair, that's for sure.

If you have any questions or comments about this shoe please contact our Sportitude shoe experts. Please subscribe to the Sportitude YouTube channel if you haven't already done so to stay notified and we'll keep pumping out these shoe reviews for you the running community all over the world.

Until next time stay safe, be kind to one another, happy running and we'll see you on the road. Take care.