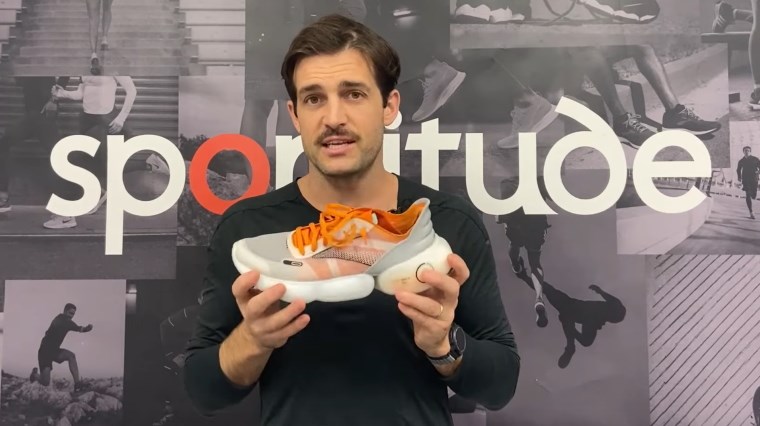 Josh reviews the futuristic Brooks Aurora BL running shoes that are at the summit of innovation from the Brooks BlueLine Lab. Throwing away traditional theories on how a running should be, Brooks have set the running world in a spin from the ground up with this ultra-lightweight, super cushioned ride to inject the fun into your running workouts.

The Trusstic system or full ground contact you may expect from a traditional running shoe won't be found here, instead making way for the decoupled outsole. This cutting-edge outsole allows the forefoot and rearfoot to move independently without compromise to structural integrity, translating to snappy transitions. Only minimal rubber is placed underfoot at high-wear zones to maintain the incredibly lightweight sensation.

The nitrogen-infused DNA Loft v3 midsole creates a bouncy feel that caters to both steady, longer runs and quicker tempo runs – being where this joy-inspiring ride shines as you shift the pace up a gear.

A breathable Monomesh upper with bootie construction provides a secure lockdown of your feet on the supremely springy and soft midsole. Reflective panelling at the back illuminates in vehicle headlights, ensuring you stay visible to other road users during the low light hours - but you'll love to run in them day and night.

Hey guys, Josh here from Sportitude Running and today I have a very exciting shoe review to get through. In my hand I hold the Brooks Aurora BL. This shoe is like no other. I’m not even going to sugar-coat it, I’m just going to tell you straight up. Running in this shoe whether it be a mileage run, progressive run or tempo sets is a whole lot of fun.

Brooks have a BlueLine team which is what the BL stands for. They’re a separate group of engineers that work on all their innovation and new technologies. What we have here is an outrageous looking shoe.

In today’s review we’re going to be getting through the engineering components being the outsole, midsole and upper. I’m going to give you subjective feedback about what I think this shoe is going to do for runners and throw into that conversation my personal experiences.

I have done 50 kilometres in this shoe. I wanted to do a few runs and change it up regarding what I used it for so I could better understand what Brooks are trying to do and give you all the information that you need to maybe make a purchase.

That’s obviously if you can get over the fact that it looks outrageous, but I love it personally. Without further ado let’s get stuck in.

For the Brooks Aurora BL let’s dial into the tech specs before I dial into the shoe itself. It’s crazy light. The men’s size 9 comes in at 240g and that’s pretty darn light for a max cushioned shoe. The heel-to-toe drop is 6mm and Brooks would not release the official stack height which I find very interesting. It may come out in future discussions.

If it happens to be 6mm drop, my guess is it’s probably going to be a 32mm heel to a 26mm forefoot. It may look like a 46mm heel, but this midsole wraps around your heel and your calcaneus. Your foot sits deeper than what you can see regarding the wrap of the midsole in that stack height. 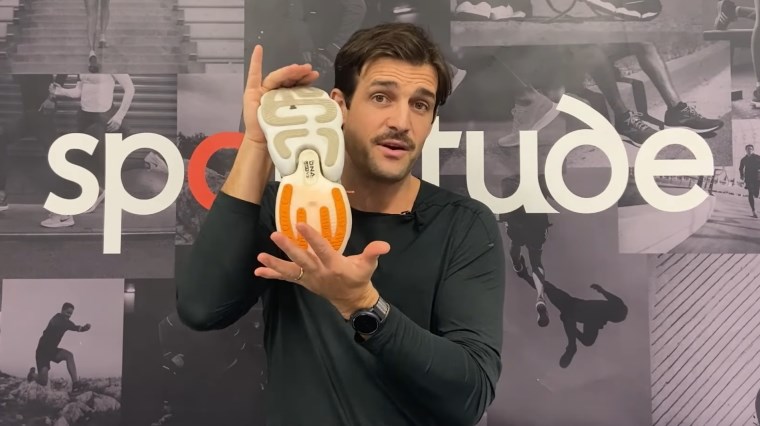 Let’s talk about the outsole. Under the shoe Brooks have strategically placed some rubber. It’s not a lot of rubber which is probably why this shoe is very lightweight.

Brooks have placed the rubber in some potentially high abrasive areas being the heel and the forefoot. However, the asset of this shoe is the midsole and they have done something very quirky and unique by offering a decoupled heel-to-forefoot configuration.

It completely goes against what we have been taught with regards to shoe engineering. Usually there’s some form of configuration, being it a Trusstic system or full ground contact with a solid piece of rubber through that midfoot.

The Brooks BlueLine team have gone back, scrunched that piece of paper up and thrown it out the window. These two decoupled systems provide a very snappy transition through midfoot to toe-off phase. The main reason you can execute this type of midsole is because the new DNA Loft v3 cushioning system is a nitrogen-infused cushioning componentry. 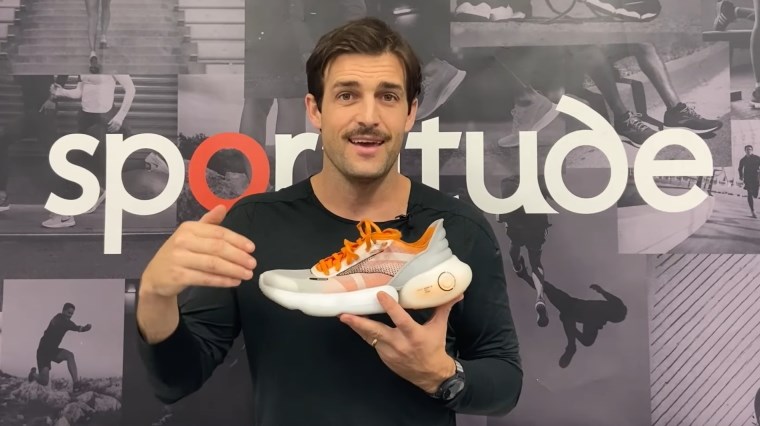 The Brooks Hyperion Elite and the Brooks Hyperion Tempo which has the nitrogen-infused midsole have now rolled over to the DNA Loft which is the cushioning system we’ve seen with the Brooks Glycerin and the Brooks Ghost running shoes gone by. Now they’ve injected that nitrogen into that midsole to create the third iteration of DNA Loft. The only way to say this is that underneath the foot it is insanely light, very bouncy and snappy.

I've ran in this shoe at a slow and steady pace a couple of times, pushing this one out for some 10km to 12km runs. At a steady pace it has enough cushioning underneath the body to dampen that impact. When you’re running slower, your ground contact time goes up. When you run at a slightly quicker pace or higher cadence in progressive runs, the shoe gets more fun the faster you go.

To give you some context my long, slow runs are anywhere between 5 minutes and 5 minutes 15 seconds per km, depending on how I’m feeling on the day. When I’m looking at a progressive run, they may start at about 5 minutes 15 seconds, but I’ll usually drop down to about 4 minutes per km to finish off. It certainly felt stable, cushioned and snappy enough at that quicker pace for me which is great. I like the fact that I can run slow in it and build up to quicker speeds and still feel like this shoe is doing what I expect it to do at that pace. 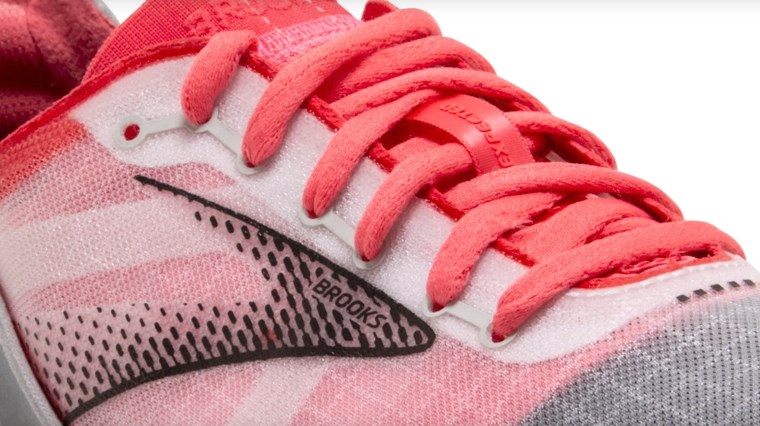 However, they've executed it with that bucketed system, cushioning component of the DNA Loft, the higher stack and my favourite part of this shoe, the arch garage. I don’t believe Brooks call it the arch garage but lets just give it that name for this review.

There’s no tongue, it’s a bootie construction but on the medial and lateral side it really locks down your arch on top of the midsole. Again, when you have a bouncy cushioned midsole like this, it’s important that your foot stays on top to make sure you're nice and secure.

I didn’t have to alter the laces too much. Once you put your foot inside this shoe you get your preferred lacing tension. Your foot feels really secure with that bootie construction and it locks the arch down which is fantastic.

It's a really lightweight upper, similar to the Flywire that Nike did a few years ago and that they’ve rolled out in the first Next%. You want to be selective with your running socks because it is a see-through upper in that forefoot. You can see if you’re wearing pink polka dots which is fine. You can see that the upper is very lightweight, breathable and extremely minimalistic.

The other cool thing about this upper is that the back of the heel counter is 100% reflective panelling. If running in the early mornings or late at night and a car is approaching from behind, you’ll literally light up like a Christmas tree from 200 or 300 metres away. It is extremely reflective at the back which I think is a nice touch regarding the heel counter.

There was the Brooks Neuro which is a lightweight shoe that they launched a few years ago and they attempted this decoupling system. It was a complete flop and it didn’t work. It had no support, no cushioning and only stuck around for about 2 years and we were happy to see the back of it.

When the BlueLine team launched the Brooks Aurora BL they were really looking to hit the market. The hype around this shoe is to do with the midsole. I can tell you at home with the 50 kilometres that I’ve done in this shoe is that every time I’ve ran in it, I’ve been thinking about what its closest comparison is. It may or may not be from the current selections in the market at the moment.

To give you some context I’d say if you like the cushioning of the Hoka One One Clifton, the responsiveness of the New Balance FuelCell and you like that slightly higher stack and lightweight feel of the Asics NovaBlast, picture those three shoes and the ingredients being put into a bowl and coming to something like this. Then add 25% of Brooks excitement and you have the Brooks Aurora BL.

Again, it is like no other. I have enjoyed every kilometre I’ve ran in this shoe. I want to point out it’s not for everyone. If you happen to be an excessive overpronator, you can put a line straight through this.

Don’t try to put an orthotic in there. I tried to see how it felt and it didn’t feel right. It is designed for someone that is efficient, that can turn their legs over quickly but is looking for that fun, bouncy cushioning experience.

I don’t know if Brooks are going to be making a version 2 of this shoe, but they wouldn’t have spent the time, money and resources executing a midsole like this if they weren’t going to roll it out in some shoes for 2022. There is a couple of shoes coming next year that will have this DNA Loft v3 cushioning system in them. I can’t wait to bring that to you at home.

There you go guys, that is my take on the Brooks Aurora BL. If you have any questions or queries about this shoe and no doubt you do, please contact our Sportitude shoe experts. I’d love to hear your feedback on what you think this shoe is all about.

If you’ve been one of the lucky ones to try it on and if you’ve watched reviews on this shoe, please let us know where you sit and how you feel about this shoe.

Please subscribe to the Sportitude YouTube channel if you haven't done so already and we'll keep pumping out these shoe reviews for you the running community.

Until next time stay safe, be kind to one another and we'll see you on the road. Take care.