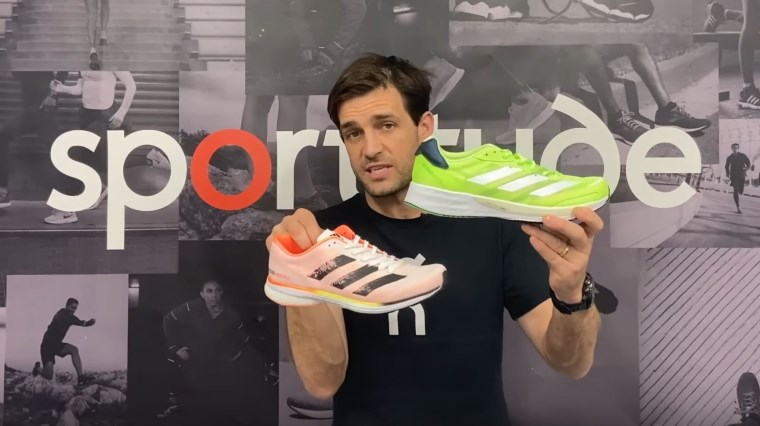 Josh reviews the Adidas Adizero Adios 6 running shoes – your lightweight ride for tempo training that provides a solid connection to the road and borders on race-ready performance with its fast and responsive feel.

The Continental rubber of the outsole is strategically placed to accommodate both heel strikers and midfoot strikers, extending the lifespan of the running shoe by reinforcing it against repetitive impacts. Lightstrike and Lightstrike Pro foam provide compressive cushioning without going overkill on the softness, so your Adidas running shoes remain stable and snappy on toe-off.

A thin gusseted tongue provides a breathable feel and works with an uncomplicated yet strong heel counter to deliver support for high-speed training at a minimal weight.

Hey guys, Josh here from Sportitude Running and in my hand I hold the Adidas Adizero Adios 6. This running shoe has just come into our warehouse and I have had my pair for the best part of two weeks. I have done a couple of quicker threshold runs in this shoe, so I have a pretty good understanding of what Adidas have tried to achieve.

In today's review we're going to be talking all things Adidas Adizero Adios 6, compare it to the Adidas Adizero Adios 5 to see where the changes have happened and give you some indication on whether this should be a shoe you consider throwing into your rotation. I'll also give you my subjective feedback at the end of the review. Without further ado let's get stuck in. 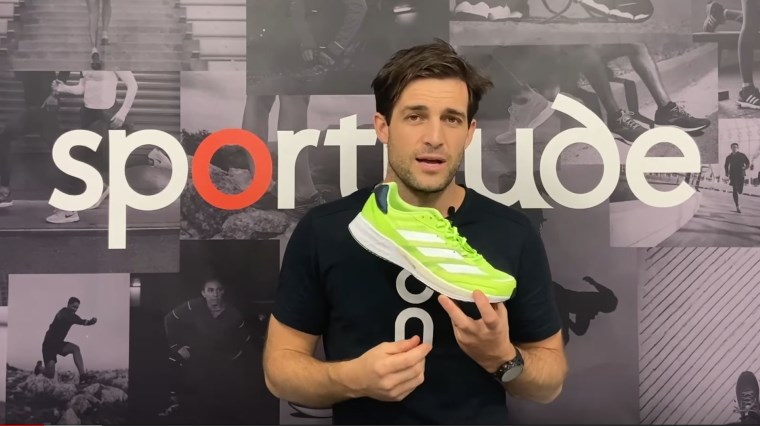 First things first, let's talk about why this running shoe even exists in the first place. The Adidas Adios franchise for the best part of half a decade has always been that lightweight tempo to almost race day shoe for that runner that really likes a good connection with the ground. They’re almost searching for that proprioceptive feel but likes that snappy responsive kick on toe-off. 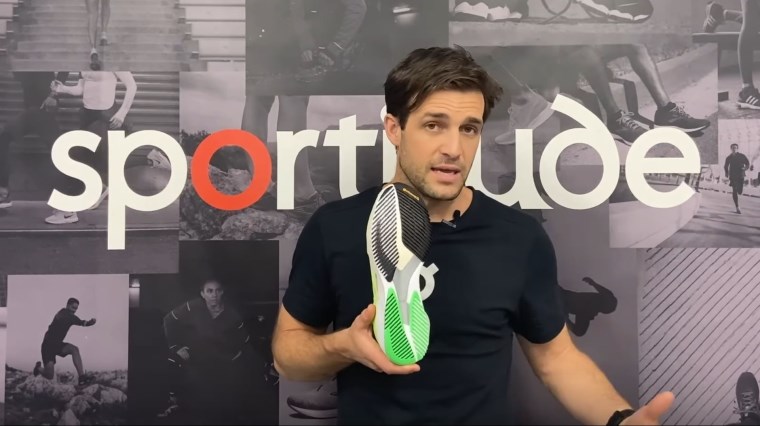 First things first, let's talk about the outsole. Adidas have a partnership with Continental rubber and the Continental rubber is on play through almost the whole forefoot. There's a torsional structure which almost looks like a wishbone which starts at the base of your heel and runs through to that forefoot, giving extra stabilisation on the medial side and lateral side.

There’s also Continental rubber at the back which protects the heel of this shoe for someone who may come down and heelstrike. I'm a midfoot striker and there's a perfect amount of rubber underneath my strike zone through the entry point which is great. 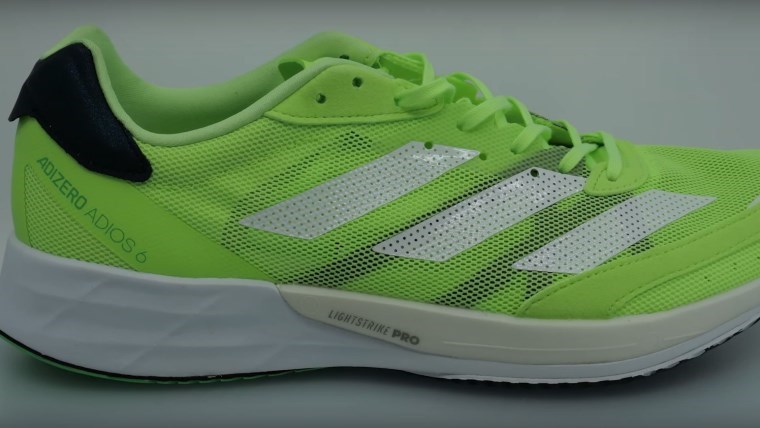 Coming to the midsole this is again where Adidas have really upped their game over the last series of Adizero shoes. In the previous model which was the Adidas Adizero Adios 5, there was a little bit of Boost technology on offer underneath the heel and it was almost pointless. I say that tongue-in-cheek because the runner that was looking at this shoe tended not to be biased towards heel striking, they were more biased towards midfoot striking or forefoot running.

If that runner did come downhill at some point in time during their run there was going to be enough cushioning underneath the heel, but the Boost technology was almost a wasted asset in my opinion with the Adizero Adios 5.

It features Lightstrike technology underneath the heel and then as it dials in it gets a little bit skinnier underneath the forefoot, because on top of that we have the Lightstrike Pro technology. This is Adidas’ superfoam which is a very light, very spongy foam. It has some similar characteristics to your Fuel Cell from New Balance if you're familiar with the New Balance franchise.

I like how this foam has been placed through the forefoot so it's not going to change any of the back half of the shoe. However, when you're coming through where I land and where I transition through to that forefoot, I want a bit of compression. I get it from that Lightstrike Pro but I also get that honest construction at the back of the heel.

Lightstrike is a nice stabilising foam. It's not crazy soft, but I don't want it to be soft back there. It really does offer the perfect amount of stability as your heel comes down through your strike zone.

Diving into that Lightstrike Pro, it’s really light, spongy and incredibly responsive. If we dive back to the outsole, that torsional system that runs in that medial and lateral side does work in unison with that Lightstrike foam to provide that snappy feel through the forefoot. 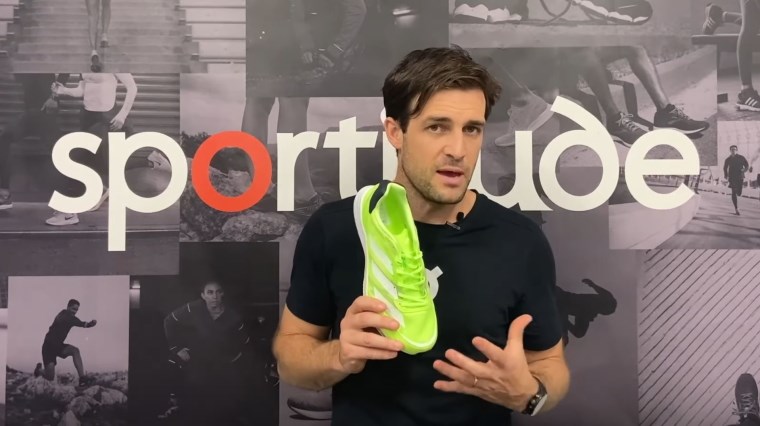 Coming to the upper of the Adidas Adizero Adios 6, I like what this shoe is all about. It is a lightweight shoe so they're going to be elements taken out to get that weight reduction. In this case most of that is in the upper because they have beefed up the midsole of this shoe a little bit.

The total weight of the Adizero Adios 6 is 240 grams in the men’s model where it was around 230 grams in last year's model. It’s marginally heavier but that's OK, it’s not a huge amount of weight increase but they have dialled in a little bit more on the upper to get that weight reduction.

In the current Adios series there is a callout to the old Adios franchise from the early-2000s or mid-2010s. The suede stitch through the forefoot provides a callout to their history and obviously the big Adidas 3-Stripes on the lateral side. However, all of that doesn't matter because the shoe is nice, light and very breathable.

What I like in all my lightweight tempo shoes is a great gusseted tongue. The tongue construction is very thin up top so you get plenty of ventilation but on the lateral side that tongue runs right down to the midsole and is attached to the strobel board and it’s the same thing on the medial side. It’s almost like an arch saddle so your foot sits locked in on top of this midsole which is exactly where it needs to be when you're running at speed and putting your force through this shoe which is what it's all about.

The other thing to callout is the simplistic approach to a heel counter, but it is stable. I really like the fact that it is a strong heel counter but there's not a lot of weight going into the back of this shoe. Again, this running shoe is all about getting as light a weight as you possibly can but also optimising performance.

I really like what they've done at the back of your Achilles and also the ability to come back to that last eyelet if you want to get that runner's heel lock lace going to lock your foot right into place.

This running shoe is true to size. I'm a size 9.5 in the men's model and I am a D width in this shoe. It’s probably a little bit tight through the midfoot for me personally, but again I feel that this is going to give a little bit over time. That saddle will stretch out a bit for me which is going to be great.

I did find it to be a little narrow through that arch area but that forefoot is nice and roomy. It’s a little bit boxy through the front half which is fantastic as well. 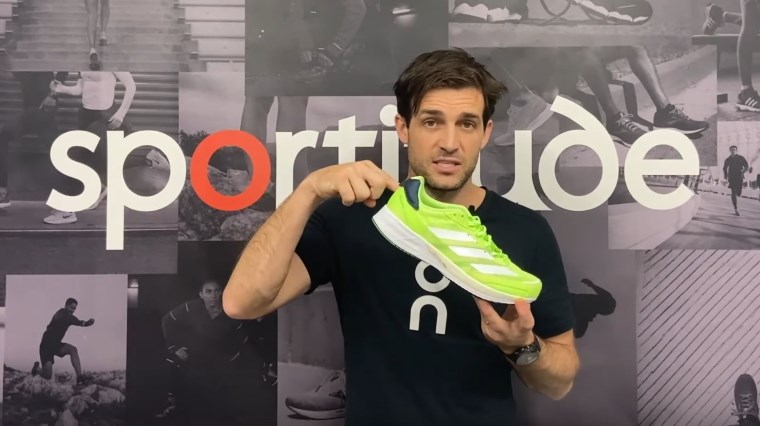 Wrapping up the Adidas Adizero Adios 6, I personally like what this running shoe is all about. I think it's really on point with the market in regards to where this running shoe has come from in the last couple of years.

I will call out a couple of things. Yes, it is a little bit different than the Adidas Adizero Adios 5, being on a higher stack with different foams and a little bit more outsole.

Not a huge amount has changed with the upper. I did say in my review that there is a bit going on, especially with that gusseted tongue or that bootie construction but most of the change is in the midsole. It’s marginally heavier, with a higher stack and different foam.

It's a pretty important thing to know at home because going from one model to the next doesn't mean it's always going to fit, feel and function the same or that you're going to get the same amount of comfort, support and performance. You really need to understand what brands are doing with the engineering as they change from one season to the next.

I like what this shoe is all about. If you have any questions or comments about my subjective opinion or about the tech features of this shoe, please contact our Sportitude shoe experts. If you’ve been an Adidas Adizero Adios wearer, we'd love to hear your feedback.

Subscribe to the Sportitude YouTube channel if you haven’t already done so and hit the red button to stay notified and we'll keep pumping out shoe reviews for you the great running community all over the world.

Until next time, stay safe, be kind to one another, happy running and we'll see you on the road. Take care.