How To Practice The 5 Key Netball Passes At Home 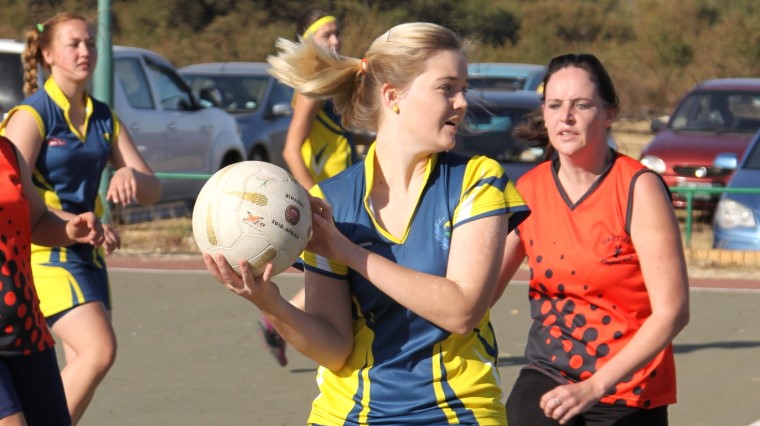 On the court, it’s critical to make snappy decisions and strategise your passing on the fly. Using the right type of netball passes under the right circumstances can make the difference between your team remaining in possession of the netball or your opponent intercepting it.

To help you outwit your defenders and weave the netball up the court and to victory, we’re giving you the lowdown on the 5 key netball passes; the chest pass, shoulder pass, overhead pass, bounce pass and lob, including how to practice them effectively by yourself and when to use them on match day.

As we touched on earlier in 6 Netball Drills You Can Do At Home, all you need is a netball and an outdoor wall to perform netball passing drills on your own.

Mark the wall with an ‘X’ at different heights with chalk. While your coach and team are inaccessible, these targets will allow you to practice your passing accuracy on your own.

Catching the netball on the wall rebound of chest, shoulder and overhead passes will allow you to continuously practice passing and receiving the ball without interruption. If the ball flies out of your reach, retrieve it swiftly to maintain momentum and mirror the fast-paced nature of your sport.

Increase your distance from the wall as your precision improves, applying more power behind your passes to remain on target. Practice passing with both your dominant and non-dominant hand. Even during solo practice, you’ll get a feel of how particular passes are best suited for certain circumstances depending on whether distance, height or agility is most required in the moment. 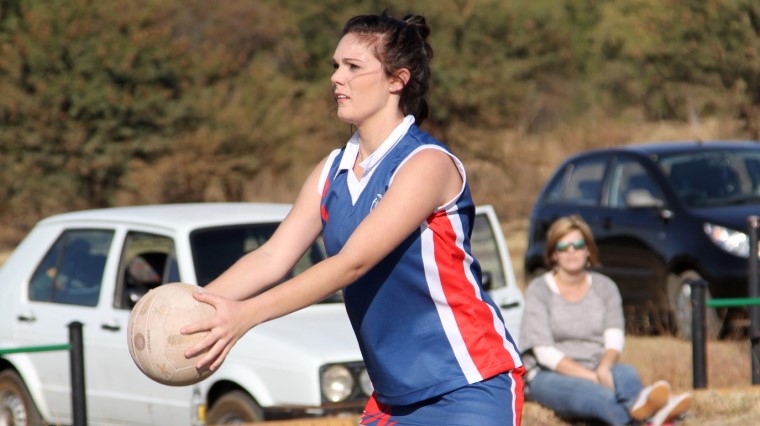 As the most basic and accurate pass, the chest pass is frequently used on the court and a fundamental skill for all netball positions and skill levels. This two-handed pass is primarily used for fast, short passing but is also capable of longer distances.

The chest pace enables you to generate plenty of power, even from a stationary position. It takes time to practice the level of power needed to prevent overshooting the pass and reduce the risk of losing possession.

The chest pass is used to weave the netball towards the goal circle, to set up for shooting, throw ins or on centre passes, when the Centre (C) player throws the ball back into play after their team have successfully scored.

It is a key skill for short, direct passes that give little opportunity for the opposition to gain possession. With practice, the chest pass has a high potential for accuracy, making it a reliable choice to transfer the netball to a receiving player that is in motion.

1. Hold: Hold the netball with a two-handed grip at chest height with thumbs and forefinger forming a ‘W’ shape in front of you. Your remaining fingers should be stretched evenly and comfortably to either side of the ball for a firm and controlled grip.

2. Step: Stand with your feet shoulder-width apart, with knees slightly bent for a well-balanced posture. Take a single step with one foot, transferring your weight forward and raising the heel of the back, non-stepping foot to elevate the momentum behind the pass. Remember walking or running with the netball is not allowed. Keep your eyes facing the direction you wish the ball to go, unless you wish to fake the pass to outwit opponents before committing to the actual pass.

3. Push: Initially the netball should be drawn close to your chest with elbows tucked in by your sides for improved power and efficiency. Push your arms and fingers straight forward, with an upward angle to the wrist to follow through with the extension. 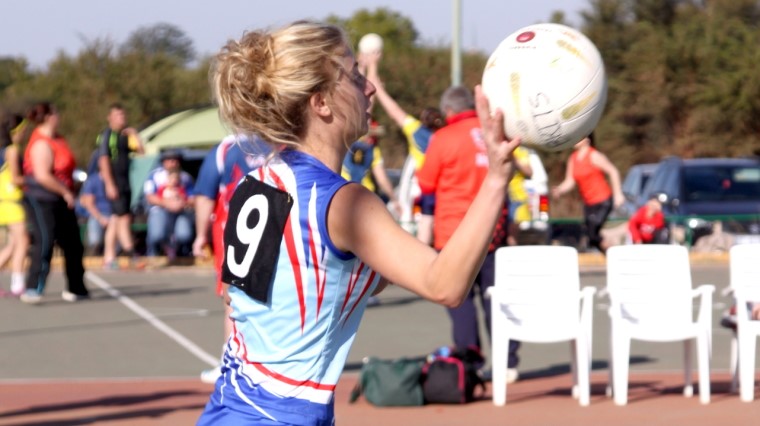 The one-handed shoulder pass is thrown from a higher point above the shoulder rather than from the chest. This additional height makes it more challenging to intercept by defenders and allows the pass to cover more ground quickly.

Shoulder passes are thrown direct and straight rather than lobbed and high arching in order to gain distance and speed.

When used correctly, the shoulder pass enables your team to break through zonal defence by the opposing team, allow an open player to receive the ball from a distance and encourage quick progression up the court to the attacking zone.

However, be aware that a shoulder pass is not legal if thrown directly from the defensive goal third to the attacking goal third – the netball must be handled in the centre third in between to be in legitimate play.

1. Hold: Cradle the netball in the palm of your dominant (throwing hand), resting it against your fingertips. Keep the elbow of your throwing arm level with your shoulder, with your arm forming a 90-degree angle and ball raised in your palm. Your non-throwing hand can be used as support if needed while you get the netball into position. Keep your head up.

2. Step: Stand with your feet shoulder-width apart with knees slightly bent for a controlled stance. This allows you to put force behind the netball with a spring-like motion of the body. Step forward with the opposite foot to your throwing arm and raising the heel of the back, non-stepping foot.

3. Push: Drive the netball forward with a snappy rotation of the hips, transferring your weight forward onto your front foot. Extend your throwing arm straight forward, backing the motion with power targeted behind the netball.

4. Release: Release the netball once your arm is completely extended and follow through with your wrist. Your eyes and fingers should follow the direction of your receiver and the pass should end with palms down, facing the court.

The two-handed overhead pass has similarities to the chest pass but rather than being thrown from the chest, the overhead pass is launched from above the head. Unlike the shoulder pass, the netball is held centred and in line with your body. Power and distance are a priority for the overhead pass to prevent interception by tall defenders.

This strength-driven pass is ideal for when you’re being aggressively marked or crowded by defending players. It allows you to gain distance for your team and to hurl the netball above the opposing team’s heads. The overhead pass is particularly effective in driving the netball towards a receiving, open player in the next third of the court.

1. Hold: Hold the netball with a two-handed grip above your head with thumbs and forefinger forming a ‘W’ shape behind the ball. Your remaining fingers should be stretched evenly and comfortably to either side of the ball for a firm and controlled grip – you shouldn’t be cradling it in your palm like the shoulder pass. Keep your elbows tucked close to your body with arms bent. The netball should be centred above your body.

2. Step: Step forward with your dominant foot, transferring your weight forward and raising the heel of the back, non-stepping foot to elevate the momentum behind the pass. Simultaneously, lift the netball slightly behind your head to generate greater force. Note that stepping into the pass is critical for achieving longer distances where additional power is required.

3. Push: Target the pass between the head and chest of the receiver. Launch the netball forward fast and hard, using your arms like a catapult to build up power and backing it up with the force of your body.

4. Release: Release the netball when your arms, wrists and fingers are fully extended forward, pointing in the direction of your teammate. The pass should end with arms outstretched and palms down, facing the court.

The bounce pass can be one or two-handed and provides the opportunity to get out of tight and tricky spaces without losing possession when you feel cornered. The bounce pass allows you to 'dodge’ the netball through well-played defence by bouncing it low and out of reach of the opposition. What the bounce pace lacks in distance it makes up for in manoeuvrability.

For best chance of success, keep the element of surprise in your favour by ‘faking’ a chest pass before committing to the bounce pass – leaving little time for the opposition to react or intercept the netball.

Forceful and fast, the bounce pass is ideal when space has been limited by defenders and opportunities to make a more direct pass are risky or restricted. It’s particularly used within the confines of the goal circle, allowing Centre (C) or Wing Attack (WA) to transfer the netball to the team’s Goal Attack (GA) or Goal Shooter (GS) as they set up to shoot.

1. Hold: After receiving the netball, lower it to about waist or hip height, keeping elbows close to your body. You can use the two-handed grip method (similar to step 1 of the chest pass, with thumbs and forefinger arranged in a ‘W’ behind the ball) or one-handed method for improved accuracy, cradling the netball in one hand with fingers evenly spread behind it.

2. Step: Stand with your feet shoulder-width apart with knees slightly bent to apply extra force to ‘spring’ into the pass. Step with the opposite foot to your throwing arm (if doing one-handed pass) and raise the heel of the back non-stepping foot as you transfer your weight forward.

3. Push: Keep your eyes on the 2/3 point between you and your teammate or target, aiming to bounce the netball at this point effectively and accurately. If doing a one-handed bounce pass, position the netball to the side, in level with your hip. Generate power with your knees, arms and core muscles to propel the ball to the desired point, pushing with your arm and keeping fingers pointing low towards the court surface.

4. Release: Release the netball low at approximately hip height with arms, wrists and fingers extended into the bounce pass. On match day, it should be received by your teammate at no higher than hip level. 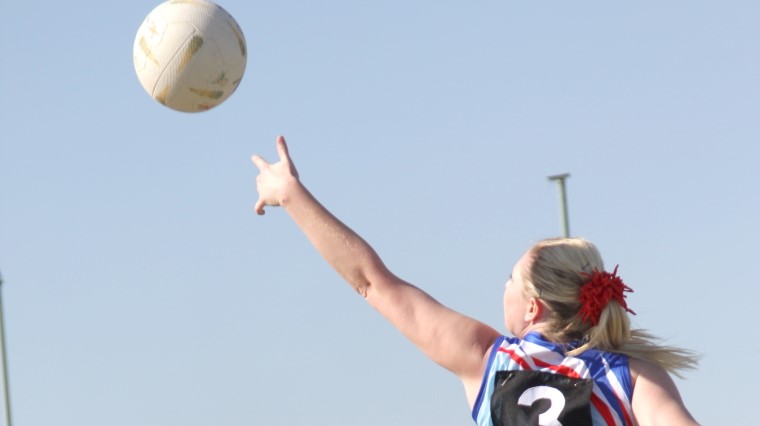 ‘Up and over’ is the goal of the lob pass. The lob pass is suitable for both short and long distances and lets you earn back control for your team from a congested area.

The high, arching trajectory of the lob allows the netball to fly up and over the outstretched arms of defenders – mirroring the ‘Piggy In The Middle’ netball passing and defence drill.

The execution of the lob pass is challenging but you can improve your accuracy with plenty of practice at home. The setup has similarities to the shoulder pass.

This ‘throw-up’ pass is ideal when you’re closed in by defenders and your teammates are being tightly marked, blocking their ability to receive flat passes without the netball being intercepted.

It allows you as the passer to create opportunities for your teammates to run for and receive the netball in more open space (technically called a drop pass) or to extend out of their defender's reach to catch it without sacrificing possession.

1. Hold: Cradle the netball in the palm of your throwing hand, with your hand beneath the ball and fingers spread behind it. Place your other hand on the front, upper area of the ball for support. Your elbow should form a 90-degree angle, in line with your shoulder.

2. Step: Stand with your knees slightly bent. Step forward with your dominant foot, transferring your weight forward to generate more power into the pass.

3. Push: Extend your throwing arm fully upwards and angled forward above your head (rather than straight out in front of you like a shoulder pass), targeting the space above the head of your teammate and generating force in the arm movement to gain height.

4. Release: Release the netball at its highest point and flick your wrist and fingers in the direction of your target to launch the netball in a high, looping trajectory out of your defender’s reach.