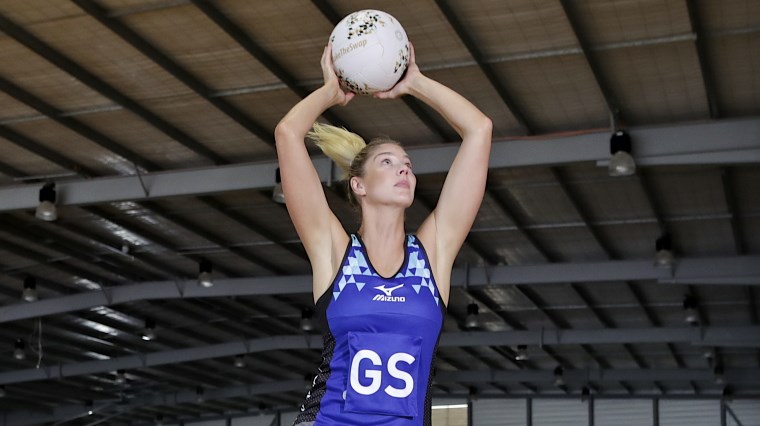 Now that you know how to practice netball passes at home and how to improve your goal shooting with our top netball tips, it’s time to put these netball skills into play to refine your technique.

Whether you’re looking for netball passing and shooting drills to warm-up before diving into team practice or to sharpen your accuracy, increase your reaction time and overall speed, these netball drills have you covered.

Keeping in mind that netball is a fast-paced team sport, we’ve included beginner netball drills that are ideal for pairs, small groups and up to large groups.

This is a simple passing drill to warm up and concentrate specifically on your passing and receiving skills. Each player in a pair stands 2 - 3 metres away from each other. Pairs pass the netball to one another, focussing on accuracy in passing and receiving. Practice chest passes, shoulder passes and bounce passes.

Shooter and Feeder is a basic netball drill to sharpen shooting skills. Players place 10 numbered cones randomly in the goal circle. The shooter begins at cone number 1 and aims to shoot the netball into the goalpost at that distance.

The feeder retrieves any missed shots and passes the netball back to the shooter to try again. Only once the shooter has successfully made a goal can they move to the next cone and repeat. The goal is to progress from cones 1 to 10 quickly and with taking minimal shots. The time it takes for each shooter to successfully complete the course can be recorded for a competitive twist.

Include a third player to act as defender. The defender’s role is to block the shooter with outstretched arms, training the shooter to practice shooting technique under pressure while increasing difficultly.

Golden Child is played in the goal third and is designed to improve shooting accuracy and well as overall speed, agility and teamwork.

On the whistle, the first player in the shooting team tries to shoot a goal then returns to the back of the line for the next player to take a shot and so on. When a player successfully shoots a goal, the whistle is blown and the first player in the running team may begin to run around the goal third. The runner aims to have an explosive push-off from the starting point.

The goal is for the runner to complete a circuit of the goal third and reach the starting point before the opposing team has successfully had another goal, earning their team a point.

The shooting team continues to take turns shooting until a goal is successful and then they shout “freeze”. The runner must stop in place and the next runner in line begins their circuit around the goal third and so on until all but the last runner has had a turn running.

Players: Up to 10 players

Repeat with all players taking a turn passing in the centre and as a defender. Focus on correct passing technique. Practice with chest passes, shoulder passes, bounce passes and lobs.

Players: Up to 10 players

The receiving player passes back to the player in the centre of the circle. The process repeats with the passing player throwing to the next receiver in the outside circle until a full rotation of the circle is complete and all players have successfully received and passed the ball.

On each rotation, focus on increasing ball speed while maintaining throwing precision. The passing player in the centre must pivot to face each player when passing the ball.

For solo netball drills see 6 Netball Drills You Can Do At Home.