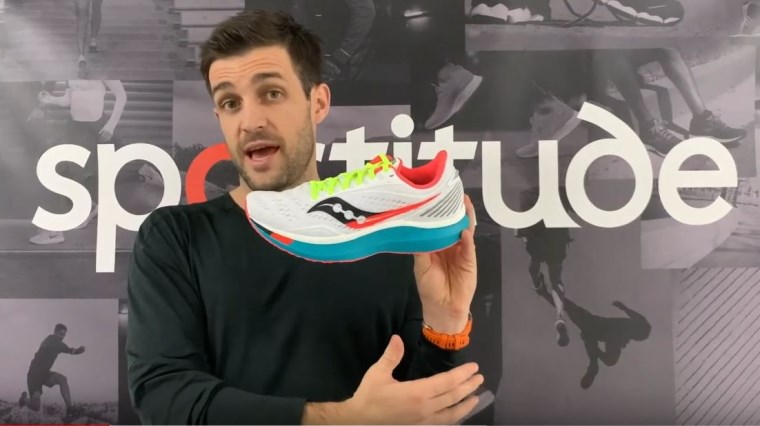 Since its June 2020 release, the Saucony Endorphin Pro has flown off the shelves. With the same competition-ready technologies at a more budget-friendly price point, the highly anticipated Saucony Endorphin Speed is primed to follow suit in terms of popularity and performance.

From the ground up, these road racing shoes are engineered for record-breaking speed. They boast harder-wearing rubber in high-wear zones of the outsole to protect the asset of the shoe – the snappy PWRRUN PB midsole – your short cut to a new personal best.

Josh weighs up the Endorphin Speed’s semi-rigid nylon plate against the Endorphin Pro’s ultra-stiff carbon-fibre plate. Both cater to road runners that crave a sensation of ever-lasting momentum, but at varying degrees of pop as they propel you towards the finish line.

The Endorphin Pro features a lighter, thinner engineered mesh upper, whereas the Endorpin Speed has a more structured upper with an internal heel counter for locked-in support as you accelerate the pace.

This shoe is going to be launched on the 1st of August 2020 in Australia and there is a lot to like about it. It has some familiar characteristics with the Endorphin Pro. However, it potentially might be more runnable depending on the runner's requirements.

In today’s review we're covering the outsole, midsole and upper. We're going to compare it to the Endorphin Pro to show you some of the subtle build changes from one to the other and give you the information at home to potentially throw this into your shoe rotation. Without further ado let's get stuck in.

With all my shoe reviews we start with the ground and work our way up. The outsole of the Endorphin Speed is very similar to the Endorphin Pro.

To the naked eye you'd probably say, “that's the same shoe Josh, just in different colours” and you're absolutely spot-on. The outsole is built exactly the same, the only aspect that's different is the colour of the rubber underneath.

They’ve put harder wearing rubber in high-impact areas, so for heel strikers the first lateral part of the heel is more protected. As you're coming through to the forefoot of the outsole it's not overly flexible - the flexibility is in the midsole.

The PWRRUN PB midsole is a very soft but also very responsive foam. The outsole's job is to keep that asset protected and that's exactly what they've done with the Endorphin Speed and the Endorphin Pro.

Moving right on to the midsole. You have the same foam technology as you do in the Endorphin Pro. We're talking about the PWRRUN PB foam which is that very soft, responsive foam that Saucony have engineered.

It also has the exact same heel-to-toe drop which is 8mm in the same stack height. On paper it looks very similar to the Endorphin Pro. The only real change in the midsole is the nylon plate which runs from the heel to the forefoot. It has the same positioning as the plate in the Endorphin Pro, however it is a carbon plate.

Being stiffer provides a little bit more propulsive assistance as well. The nylon plate is still a nice, stiff concept but it's not as light, stiff or explosive as the carbon plate.

You may be a runner that's potentially looking to entertain a super shoe like your Nike Next %, Saucony Endorphin Pro, New Balance FuelCell TC, Brooks Hyperion Elite or Asics MetaRacer. There's numerous shoes in this category out there and I've probably forgotten one or two.

If you're thinking about getting yourself into a carbon plate shoe and may not have the budget for it, I certainly think the Endorphin Speed is a great introduction for that concept of running footwear. It still has that nice stiff plate and gives that assistance in propulsion, but it's not going to hurt your back pocket quite as much.

The nylon plate does a great job in this shoe and I really like how it ran for me personally.

Moving on to the upper, it must have a little bit of differentiation from the Endorphin Pro.

Up top there's more support in and around your heel. Saucony have engineered an internal heel counter at the back. You get a little bit more structure and integrity around the back of your heel.

You still can utilise that last lace for lockdown to give you a bit more structure and support, but the internal heel counter is on play. You can certainly see the difference if I push my finger at the back of the heel in the Endorphin Pro compared to the Endorphin Speed.

In the Endorphin Pro, having no heel counter at the back reduces the weight. For the runner thinking of getting an Endorphin Pro, it's a race day shoe and potentially an interval shoe but you're going to have good, sustainable form. You're going to be OK in a shoe that's sacrificing a bit of support to get that weight reduction.

On the other hand, the Endorphin Speed is going to offer more support around the top of your foot which I like because it's going to aid a lot of runners out there that need more support in their race day or their tempo interval shoe.

Coming through to the upper in the midpart of the shoe and the forefoot, you’ve got an engineered mesh not too dissimilar to the Endorphin Pro however it's a little bit more structured.

It's hard to tell to the naked eye but the Endorphin Pro upper is lighter and thinner. The Endorphin Speed upper is a little bit thicker which then in turn offers a fraction more support up top. It's complementing what they're doing with the heel counter as you come through to the midfoot and the forefoot with more support on top of the midsole.

I'm talking all things widths because that's very important. The Endorphin Speed is available in standard widths - a B width in the ladies’ and D width in the men’s.

As I touched on it before there is a subtle variance with the weight. I can only tell you from the men's sample I have at home. My men's size 9 of the Endorphin Pro was 213g and my Endorphin Speed was around 223g. That's on my scales and we're talking a 10g difference between the Speed and the Pro – that isn’t a lot at all.

Regarding the subtle changes within the shoe, we’re talking about the heel counter and the nylon plate versus the carbon plate. There is a subtle adjustment in the weight through there.

There you have it guys that is my take on the Endorphin Speed. I really like what this shoe is doing. It's nice and light, very cushioned but very responsive and it could be a shoe that you consider at home.

If you have ran in the Endorphin Speed or have tried it on I’d love to know your feedback. Also, give us some feedback on what you thought of the Endorphin Pro because in my previous review I was hyped up about this shoe because I really liked it in comparison to the other super shoes out there. I’m loving what you're doing Saucony, keep it up.

Please subscribe to the Sportitude YouTube channel if you haven’t done so already. If you have any questions, comments or queries about the running shoe industry please contact our Sportitude shoe experts and until next time, happy running.