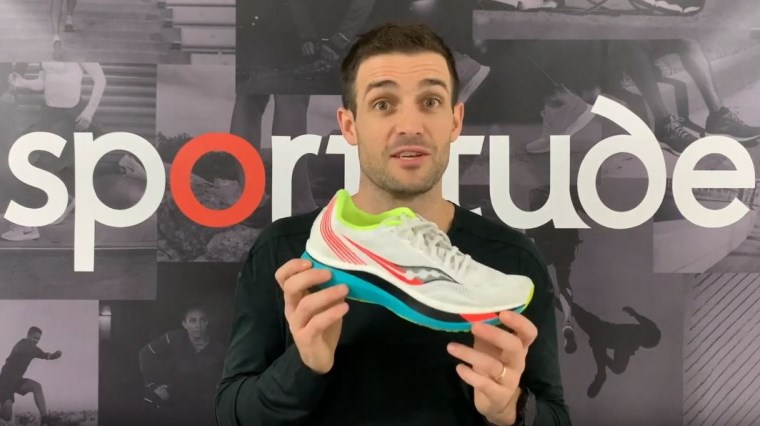 Josh reviews and shares his enthusiasm for the carbon-plated Saucony Endorphin Pro road racing shoe, an ultra-lightweight and responsive ride to propel you ahead of the pack. Engineered for your next marathon, tempo runs and race day training, this minimalist design allows you to unleash explosive speed from the ground up.

Hard-wearing rubber is placed in strategic zones of the outsole, protecting the snappy PWRRUN PB midsole that makes this race day shoe the one to beat. Coupled with the full-length carbon plate, the PWRRUN PB midsole delivers a propulsive feel and high-speed impact dampening to energise your stride from starting blocks to finish line.

True to Saucony’s engineering philosophy, this speed-driven technology is packed into an 8mm offset to keep you feeling stable and efficient in your running gait. An airy engineered mesh upper sweeps away heat and humidity – so you stay fresh and fast when your race demands more.

Hi guys, Josh here from Sportitude and it’s shoe review time. We’re doing it on the Saucony Endorphin Pro. I'm so excited about doing this review. There is so much about this shoe that I love personally and I'm really looking forward to delivering my thoughts to you at home.

It is their take on the carbon plate racing phenomenon that is going on right now in the running shoe world. Let me tell you, it is a delight to run in. It is as simple as that.

Like all my reviews we'll talk all things outsole, midsole and upper. We’ll profile the runner that could be considering this shoe.

Today is a bit different than my other reviews. I'm going to give you my personal feedback on this shoe and what I liked about it because there's not much I don't like. Apart from the fact that it’s white and it might get dirty, that’s the only thing I don’t like about it.

Let’s start off with the outsole. I want to say thank you to my friends at Saucony Australia who slung me a pair of these about a month ago. It was a bit cheeky, I received it about four weeks before the global launch.

However, you need to make sure that the asset of the shoe which is the midsole where all the magic happens is nice and protected. You don't have over-wear areas in specific parts of the shoe.

The outsole has almost a borderline with regards to the execution. It runs right around the PWRRUN PB midsole. Through the forefoot it's nice and durable with enough flex grooves. However, when I say flex grooves it's obviously restrictive because you have a carbon plate that runs through this midsole.

I’m a midfoot runner and the good thing about this shoe is it provides a good purchase area with the ground. If you happen to be a heel striker, don't worry because it's going to give you enough support underneath as well. There’s good solid rubber placed at the base of that lateral heel and for a forefoot runner there’s plenty of protection up front.

It's not a very thick outsole and you don't want it to be because you want to reduce the weight as much as you possibly can. The materials they have used provide plenty of durability underneath the shoe for race day.

It's not a shoe that’s going to last miles and miles. You're going to use it on special occasions, building for your tempo runs and maybe a couple of race simulated events or training sessions before race day.

Coming through to the midsole which is where it all happens. We're going to touch on the offset first. We have a 35.5mm heel which is measured with callipers at the back of the heel and then a 27.5mm measurement through the forefoot.

You've got an offset of 8mm which is about bang-on. It also plays to Saucony’s theory of having offsets no more than 8mm. They've been able to pack in all their engineering into this philosophy and the offset is an important part of Saucony’s vision within their running shoe engineering.

That being the case, we have a PWRRUN PB midsole. The PWRRUN PB midsole is a very light foam. Saucony have taken measurements into consideration and they're claiming it's 40% lighter than their PWRRUN midsole.

They're also claiming the foam is 88% more responsive. Of course, we'd love to see the statistics in how they have come to that conclusion, but I'm going to trust the team.

You’re going to get the response not necessarily just from midsole, but from the full-length carbon plate. Right from your heel to your forefoot, that strategically placed carbon plate assists in dampening the vertical force on your running gait and turns that into propulsion for a really snappy feel on toe-off.

It's complicated, but it’s uncomplicated. I like what they’ve done with the midsole. It’s a very light, responsive foam and with the carbon plate it is a great combination. I can't speak highly enough of this shoe, it has a phenomenal feel.

Coming up to the upper, there's not a lot regarding the overlays or anything like that. It must be minimalist and play true to a racing shoe feel. It’s quite a deep heel counter, there's a lot of depth and it's not an overly stable structure at the back. They haven’t put in any external heel counter wedge.

For example, the New Balance FuelCell TC has an internal heel counter built into the back of the shoe which makes it a bit more stable. They haven’t done that in the Saucony Endorphin Pro.

I personally like the feel of it because I found I got the right lockdown with my heel and it didn't feel intrusive. I'll touch on why I like the non-heel counter component of the shoe in two ticks which is my subjective perspective of this shoe.

Coming through to the midsection of the shoe you almost have a gusseted system. The tongue is attached to the lateral and medial side of the shoe, so it gives you more of a lockdown in the arch.

There is a lace loop or lace garage on the tongue as well. On race day when you don’t want your laces flapping around, you tuck them into your lace garage and you won’t have that annoying flap with your laces bouncing around.

Coming through to the forefoot it has very open breathable engineered mesh. I can't fault it and it’s been a pleasure to run in this shoe.

Let's dive into why I like this shoe because I am so pumped up. I'm looking forward to events coming back. Being an amateur triathlete and potentially targeting a Half Ironman or Ironman in 2021, I had an idea of what I was going to race in.

However, after running in this shoe for a few weeks I'm super excited about potentially getting this out on my foot on race day.

It is very stable. I've run in the Nike Vaporfly 4%, New Balance FuelCell TC and the Brooks Hyperion Elite as well. All have great features that I have enjoyed but everything about this shoe regarding running in it, my tempo sessions and getting up to speed felt stable.

When I picked this up out of the box I looked at the heel counter and thought I'm just not going to feel supported inside the shoe. I believe the reason Saucony have taken away that additional weight and structure is because they have executed the midsole in combination with the carbon plate and PWRRUN PB. You feel stable on top of that platform, so you don't need to overcomplicate the upper to keep you secure.

The foam underneath the New Balance FuelCell TC is considerably softer. Therefore, the range of movement for me was a little bit more open, so I needed that lockdown in the heel which I liked about that shoe.

However, I love the fact the Saucony Endorphin Pro is light on top. I feel stable on the midsole and I feel very responsive, it's as simple as that. That's what you want with a racing shoe, it needs to be uncomplicated.

What brands are doing in this carbon plate space is a great topic of discussion and I am absolutely loving what they've rolled out in the Saucony Endorphin Pro. It’s a shoe I'm super pumped about selling and obviously selling to the right person. You must profile the runner of course but it's exciting and I'm amped to see how they can make this shoe better with version 2 - it's going to be hard to beat.

That’s my take on the Saucony Endorphin Pro. It’s a phenomenal shoe, I love it. As I touched on, the only thing I don't like is that it's white, but I don't mind a white shoe every now and then because I enjoy running in this so much.

If you have any questions about this shoe please contact our Sportitude shoe experts. Please subscribe to the Sportitude YouTube channel if you haven’t done so already and we'll keep bringing you as much running shoe content as possible.

Until next time, happy running. Hopefully race day is around the corner and we'll see you soon. Take care.