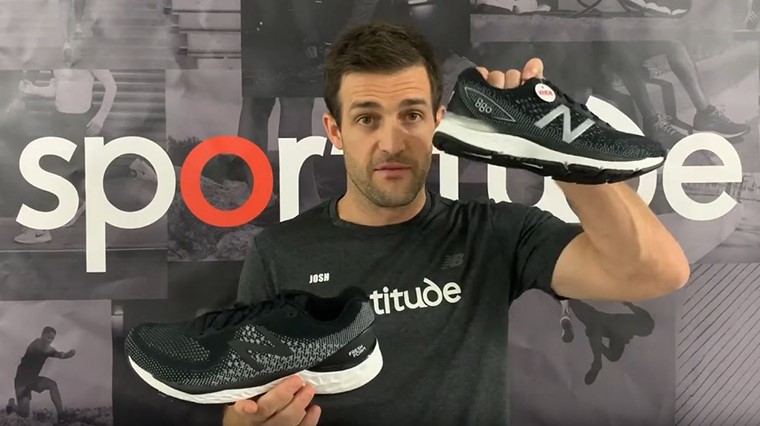 Josh reviews the New Balance Fresh Foam 880v10 and reveals how it stacks up against the earlier generation, the 880v9.

Fitting into the stable neutral category, this cushioned running shoe is ideal for neutral foot types seeking to log up high mileage. Modernised with a Hypoknit upper, it offers a more precise forefoot fit compared to its predecessor while remaining breathable.

The Fresh Foam X midsole couples with a responsive EVA layer for softness underfoot without being overly spongy - perfect if you prefer a snappier sensation over all-out plushness. With multiple width options to accommodate various foot shapes, the 880v10 lets you lace up in a more personalised ride.

Check out the full review with transcript below.

Hey guys, Josh from Sportitude here and today we are doing a shoe review on the New Balance Fresh Foam 880v10. There is a lot to get through. We’re talking new outsole, midsole and upper.

I’ll compare it to the previous v9 and show you where New Balance has executed their changes. Literally there’s changes across all three aspects. Without further ado let’s get stuck in.

First things first, let’s profile the runner that should be considering this shoe. It is classified as a mileage shoe. There is a lot of cushioning in this shoe, now more than ever with the new Fresh Foam technology.

It’s a runner that is doing plenty of kilometres, plenty of hours out on the road that maybe doesn’t like the softness of the 1080. I personally really enjoy the 1080. The new Fresh Foam X midsole and the New Balance Fresh Foam 1080v10 is fantastic.

This shoe here certainly feels very soft on the foot, but it is a slightly more responsive midsole. Not all the runners out there want really soft cushioning, some want that mixture of softness and responsiveness and that’s where this shoe fits in the market for New Balance.

When they go through their transition through the gait cycle from heel strike to midstance, the majority of pressure is on the outside of the foot or like the word, neutral through the centre part.

Like I’ve said previously with stable neutral shoes, there are scenarios where a foot type that slightly pronates through midstance, splays out the arch but doesn’t like the arch support of some of the running shoes out there, have had success in this category of shoe. We at Sportitude have profiled the 880 to be a stable neutral shoe.

With all my shoe reviews, I like to start from the ground and work our way up so let’s talk all thing outsole first. I have in my hand the Fresh Foam 880v10 and I will compare it to the Fresh Foam 880v9. Execution wise, you can obviously see change. There is change that has happened with this outsole, however it is only minor.

You’ve got the Crash Pad on the v9 which is strategically placed underneath the heel. It’s harder wearing rubber because for heel strikers that come down and hit the ground, they hit the ground with more impact force than what you would expect from a midfoot to forefoot runner.

The rubber at the base of the heel for heel strikers needs to be a stronger hold and that’s what it is here for the v9 and the v10. You can see how it’s cut away on the lateral side of the heel to dampen that impact in the first point of contact with the ground.

The shoe features full ground contact. They haven’t taken any outsole away and put in some thermoplastic beams to split the heel and midfoot, which is what running shoes have done previously. We’re seeing a lot more full ground contact execution across all brands.

As you come through to the forefoot, in the v9 you can see there’s two noticeable flex grooves that run from the medial side through to the lateral side of the shoe to provide some support but also a little bit of flexibility on toe-off.

As you hold up the v10, you’ve got two flex grooves as well, however they’ve slightly changed the execution of where they start and finish on the medial and lateral side. They’ve also thrown in a little slit which runs a vertical line through here. That provides extra flexibility on toe-off.

There’s not a huge change from mid to toe-off in the v10. However, how they’ve placed that outsole on the Fresh Foam midsole is going to be a little more flexible, which is a nice change for this shoe.

As we come through to the midsole, there’s been no change in the stack height from the v9 to the v10. There's a 10mm heel-to-toe drop, which is about normal for the majority of mileage shoes out there. Some brands drop to 8mm and 6mm. There’s obviously a lot of zero drop shoes as well but for standard running shoes 8mm, 10mm or 12mm is pretty normal for the heel-to-toe offset.

The midsole is the new Fresh Foam X but with a little bit of assistance with additional responsive foam that New Balance has used through the forefoot. Unlike the New Balance Fresh Foam 1080v10 which is Fresh Foam the whole way through, this is what I’d classify as 90 - 95% Fresh Foam.

The reason they’ve done that is because they don’t want it to be too soft. It’d be too much like the 1080 if it was all Fresh Foam. Having the extra layering of a traditional EVA midsole on top can give a bit more pop on toe-off.

As you’re coming through to the contact point at the back, they’ve cut away the Fresh Foam midsole on the medial and lateral side. Like they’ve done with some of their Fresh Foam shoes previously, they have a convex and concave set-up. It’s concave on the lateral side with bigger dimples which are designed to take a bit more dampening. On the medial side there’s a convex set-up, allowing the dimples to pop out a little bit to provide extra compression rate.

It’s not arch support, but it’ll compress slightly differently than what it will on the lateral side. A softer lateral side and slightly firmer medial side is essentially how they’ve executed the midsole.

As we come through to the upper, we’ve got the new Hypoknit through the forefoot. It’s a really nice take on a knitted upper. It’s breathable, strong and holds really well with enough wiggle room through that toe box area.

There has been 880s previously where I’ve found that my toes have a little bit too much space. They have executed it a bit better in the v9. The v10 fits a bit shallower through that forefoot, but not to the point where you have to change widths or sizes. You just notice if you’re an 880 wearer that it’s a bit of a firmer fit through the forefoot. This is kind of a good thing because the Hypoknit has a little extra wiggle room because it is a slightly more pliable upper.

Coming through to the midstance, we’re talking about a structure and design that’s going to give that mid part of your foot a nice structural hold. You don’t want to be falling off the platform, so execution wise on the knit and how it’s tightly woven through there is nice, creating a very strong hold.

At the first point in contact, we want it to be stable not only from the execution of the outsole and midsole from the ground up, but the execution on the structure of the heel counter. It’s pivotal in keeping the foot stable as it comes through from midfoot to toe-off.  That external heel counter is quite strong. It is going to provide more stability through the back half of the shoe.

The other thing I’d like to point out is which is no different from the previous 880s that if you’re an orthotic wearer you could consider this shoe. It’s nice and deep through this heel counter region. Depending on the heel wedge of your orthotic, you’re going to get extra variability in regard to what orthotic you can use inside this shoe.

I’d always encourage you to reach out to your podiatrist who has manufactured your orthotics or cast your orthotics and make sure you cross that off with them. As long as you’re using this last eyelet and doing a heel lock lace to keep it nice and stable you should be absolutely fine.

Let’s talk about the widths in this shoe. There’s a lot to talk about here. There are three widths in both men’s and women’s, which is fantastic.

Let’s start with women’s first. There is a B which is a standard width, then we’ve got a D which is slightly wider, and they offer a 2E which is phenomenal. There are not a lot of neutral shoes out there that come in a 2E in the women’s and the 880 is one of them. Kudos to New Balance, well played there.

With the men’s we have a standard D, then we go to 2E being a little bit wider and the 4E which is wider still, so three widths again.

I really harp on this a lot but when New Balance or any brand execute widths in their running shoes it means they care. They back the engineering of their shoe and the more foot shapes that can fit inside that shoe the better.

There you have it guys, the New Balance 880v10 Fresh Foam. A fantastic update, I love what they’ve done.

If you haven’t subscribed to the Sportitude YouTube channel, please do. If you have any comments, questions or queries about this shoe please contact our Sportitude shoe expects.

Until next time, happy running. We’ll see you soon.