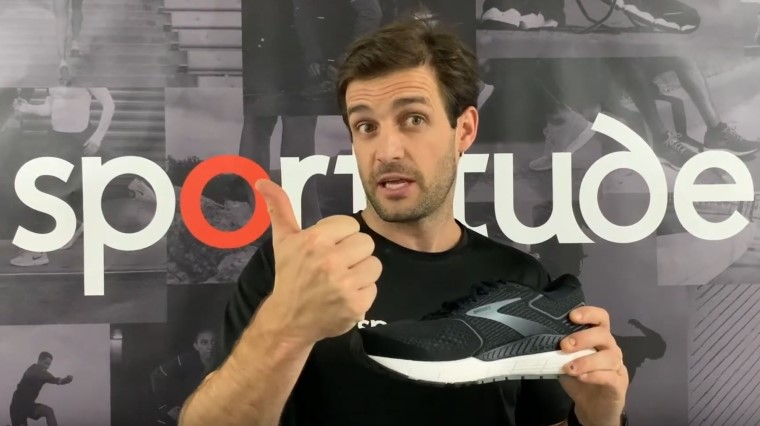 The Brooks Beast 20 is a cracker motion control shoe, catering to heel strikers and flat foot types looking to glide smoothly and comfortably over tough miles.

It has a fresh feel, lighter weight and more orthotic-friendly design compared to the makeup of previous generations and features Brooks’ signature GuideRails support system to keep you on track of your ideal motion path.

This top-end running shoe belongs on the radar of overpronators that require robust arch support, dependable cushioning and a stable purchase with the ground.

Check out the review with full transcript below

Hey guys, Josh here from Sportitude and today we have a shoe review on the Brooks Beast 20. There’s a couple of reasons I’m excited.

I have never done a review on the Brooks Beast family before and the reason is because I haven’t needed to. They’ve been so consistent year in, year out. But now 2020 is a time that I need to get a Beast and tell you all the changes because there’s a lot going on.

Like with all my shoe reviews, we’ll talk all things outsole, midsole, upper and compare it to where it was in the previous version. We’ll profile the foot type that should consider this running shoe and see if it might be something you can consider at home.

Without further ado, let’s get stuck in.

Let’s talk about the outsole of this shoe. Brooks have kept true to their word regarding the straight last. That’s really important. They wouldn’t design this shoe with a semi curved last, it just wouldn’t work. So, it’s a straight last shoe which gives you more surface area underneath your foot.

The person that is considering this type of running shoe would usually need a little more grab with the ground, hence the amount of surface area. It is nice and broad at the heel, through midstance it’s got a bit of surface area and as you come through the forefoot it is nice and wide there as well.

Notice that there is some deep flex grooves, however the rubber is a little bit thicker. You've got two and half flex grooves through that forefoot.

Your traditional mileage running shoe will have anywhere between three to six flex grooves through the forefoot so this is certainly a stiffer shoe through the sole in that forefoot area. The reason being is because it needs to give some support on that toe-off phase.

As we come through to the midsole of this shoe, we’re going to talk about the arch support. That’s the big one because this shoe here, the Brooks Beast previous version in my hand has a lot of support on that medial side in conjunction with a lot of support underneath the foot.

It has plenty of surface area in combination with that arch support technology. It’s firm, it’s hard. The thermoplastic beam on the medial side also provides a bit of extra rigidity and support.

This shoe is not too far off from what an orthotic is designed for. It’s targeting that excessive overpronator with really flat feet. It’s the natural evolution of running shoes that we’ve seen over the last five to six years. Brands are starting to shave away their arch support on that medial side.

You can do a little bit more with the shoe itself in regard to keeping the foot on a consistent line of transition, other than having to jack it up with medial support.

However, the Beast has always been a unique shoe from where it sits in the marketplace. Other brands have come and gone in this space over the last 15 years and this shoe has by far been the gold medallist. It’s always been good. It’s offered widths, it’s been comfortable, it’s been consistent. It’s been an absolute go-to for a lot of walkers and runners out there.

I’m going to be honest with you at home, the Brooks Beast 20 is going to be different. If you’re coming from a Brooks Beast 18 and you've had 1, 2, 3, 5, 10, 20 pairs of this specific shoe and you expect the new one to perform the same, well you’re probably going to be let down because it is a different design.

It’s not going to feel the same. I do believe you’re going to get some similarities regarding how it performs. The main reason being the GuideRails do come further down the shoe and they come a little further into the midsole. The actual dynamic support system does offer plenty of assistance through that transition but you won’t feel the extra weight and that support on that medial side.

You put this shoe on and it doesn’t feel too dissimilar to what the Brooks Dyad feels which is essentially the neutral straight lasted version of this shoe. When you put the Brooks Beast 20 on there’s no noticeable arch support on your foot straight away. It just feels like you’ve got a straight lasted neutral shoe on.

The GuideRails are there to do their bit when required. I’ve got to give kudos to Brooks for having a support system like the GuideRails, backing it up and believing in it.

If you change a running shoe like they did with the Brooks Adrenaline a couple of years ago, and then you change the Brooks Beast you’ve got to have done your testing to make sure it’s going to hold up OK. You would annoy thousands and thousands of people globally if you didn’t get it right.

They’ve released the Brooks Beast 20 and I think it’s going to be OK. Again, I can only go by my comfort perspective and the amount of shoes we’ve fitted down here on the shop floor and we’ve had some early success with this shoe. I can rest easy at the moment knowing people have walked out feeling confident about this shoe. Obviously proof is in the pudding and time will tell.

As we’re coming through to the midsole it is on the DNA cushioning system. That is their patented technology. It is a nice plush cushioning system with the combination of absorption and propulsion.

It is a really consistent feel. That is probably one thing that Brooks have gotten right over the last few years with the DNA midsole. It doesn’t matter where you make your first purchase with the ground, it is a consistent feel. If it’s a heel striker or if it’s a midfoot striker you’re going to get a pretty similar feel.

Now coming through to the upper. Brooks have executed a pretty unique design in regard to the midsection of this shoe. I wanted to touch on this because in theory they’ve taken away some arch support by putting in the GuideRails. Practicality is a different story.

They’ve taken away some GuideRail support and to assist that they’ve executed a stronger upper on that medial side. You can see all that space in between my two fingers is a really strong material. It’s very tightly woven. It’s a great stable fit so thus it will keep that foot relatively stable on that platform through midstance.

If they executed the same upper from the previous version on this midsole I do think you’d be falling away over that medial side, so they’ve added a little bit more support on that medial side which is a great feature.

Coming down through to the forefoot, like all Brooks Beast previously you’ve got a nice deep toe box with plenty of wiggle room. The good thing is you’re going to have 2E and 4E widths in the men’s which is going to cater to the broad and extra broad foot types that have been considering this shoe. It’s going to be a great fit.

Just jumping back to the heel counter. It’s an internal heel counter with Brooks' really nice seamed upper through the back of the shoe. Brooks have nailed the fit and feel of their heel counters. It doesn’t really matter what Brooks shoe I try on, they always feel great at the back of the heel and on that little lining around the inside.

Contrary to what you would think, we have seen a lot of orthotics over the years that have worked their way into a Brooks Beast 18 and there is nothing wrong with that. It’s OK. It does go against the industry standard or the ‘norm’ for want of a better term.

However, if you’ve got a podiatrist that’s found a shoe that works with your orthotics and your mechanics and if it happens to be an orthotic that works inside the Brooks Beast 18 and you’ve been OK with it, that’s fantastic.

However, the new Brooks Beast 20 is going to be a more orthotic-friendly shoe and let me explain why. You’ve got the arch support on the medial side on the old design and then you come around to the lateral side, it is a softer density on this lateral board.

It won’t happen straight away but as you wear into the shoe each and every week, this side will compress quite a bit. Over time, we do tend to see almost like a supinated position through the gait cycle. Again, it’s sometimes just what you’re familiar with. It's what you’re used to if you happen to be a Beast and orthotic wearer.

However, the new Beast 20 will have I believe a more sustainable midsole technology that’s going to cater for your orthotic for a longer period of time. Yes, of course you’re going to collapse that lateral side, it happens with every single shoe whether it’s a motion control shoe, supportive shoe or a neutral shoe. It’s going to compress the lateral side over time.

However, because they’ve got the GuideRails on the medial side it’s going to allow your orthotic to sit in there a little bit nicer.

You’re may be sitting their thinking “Why Dyad?” or “Why Beast?”. There are still people that need a little more arch support than what a Dyad would offer on a straight last sole, and that’s where the Beast comes in.

There you have it guys, the Brooks Beast 20. A completely new shoe and there's a lot of change inside this number. Tip of the hat and kudos to Brooks for rolling with their GuideRail technology inside the new Beast 20.

For those of you at home, there will be a safety period for want of a better term where Brooks Australia are going to carry a number of Beasts in their previous version for probably about 4 – 6 months, so you do have a safety net to fall back into if you don’t find the Beast 20 suitable for you.

When that time does come when the old Beasts are no longer available and this is your only option, Brooks still carry the Brooks Addiction which is a straight lasted, dual density supportive shoe. There’s still going to be something on the market for you which is going to keep you moving quite well, especially if you’re used to this concept or design of shoe for a number of years.

Until next time, happy running. We’ll see you soon.