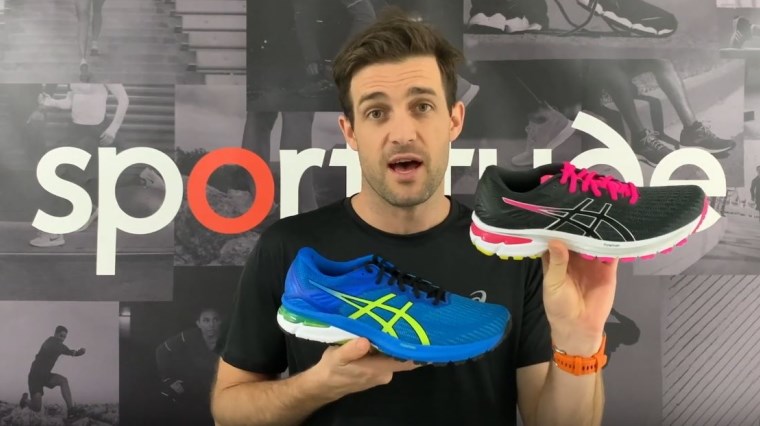 Josh reviews the Asics GT-2000 9, a high mileage stability running shoe that doesn’t stray far from the trusted support technologies of the Asics GT-2000 8, yet offers a slightly lighter and noticeably softer feel underneath your foot.

Asics have stayed true the outsole engineering of the earlier model, carrying over the Trusstic system from the Asics GT-2000 8 to the Asics GT-2000 9 to provide rigidity and support for heel strikers. Harder-wearing AHARPLUS rubber in the high-impact zone of the heel extends the lifespan of your go-to running shoes to tackle long distances and everyday training.

The Dynamic DuoMax arch support slows down the rate of overpronation, reducing stress experienced by mild overpronators from feet to hips with the firmer foam on the medial side offering guidance and support.

The density of the FlyteFoam cushioning has been modified to be softer, improving step-in comfort, shock dampening and flexibility.

With the Australian summer just around the corner, the lightweight and breathable engineered mesh upper sweeps away heat and humidity and reduces moisture build-up during hot running workouts. Available in multiple width offerings, Asics have made it easy to dial in the fit.

Hey guys, Josh here from Sportitude and today it is shoe review time. We're going to be discussing all things Asics GT-2000 9. This shoe has had a little update but let me tell you at home it's has had quite a change in regard to fit, feel and performance.

With the Asics GT-2000 8 from their last season and what they've rolled over to the GT-2000 9, the changes have only been subtle, but the outcome is vastly different.

Like all my shoe reviews we’ll be talking about the outsole, midsole and upper. We’ll profile the foot type that could be considering the Asics GT-2000 9 and give you as much information at home as possible. Who knows, it could potentially be your next mileage shoe so without further ado let's get stuck in.

First thing we're going to do with regards to the GT-2000 9 is talk about the foot type that could be considering this running shoe. It is built on a support system, so on the medial side we have the Dynamic DuoMax arch support.

It’s Asics' patented technology where they change the density of foam on that medial side of the midsole to provide a little bit of arch support for that foot type that comes through heel strike to midstance and ever so slightly collapses.

We're trying to assist that foot to slow down the rate of overpronation and minimise the amount of impact it will have on the foot, shin, knee and hip. Pronation is not necessarily a bad thing, it's just a runner's ability to absorb that impact.

However, with a running shoe like this we don't necessarily want to intrude too much on foot functionality, we just want to assist in slowing down the impact of overpronation. That's what Asics have done and that's what other brands have done by producing some form of either dual density foam or GuideRail support on that medial side.

Asics is no different with this shoe and it's playing true to what this shoe is all about over the last couple of decades.

Let's get stuck into the engineering because that's what the fun part of this shoe review is going to be all about. We'll go outsole, midsole, upper and we'll compare it to the Asics GT-2000 8 and show you these subtle changes.

There is literally no change between the two outsole components. We've got a harder wearing rubber which is the AHARPLUS rubber on the lateral side of the heel to compress and offer a little bit more assistance on that first point in contact for heel strikers.

As you step through to the Trusstic system, that device splits the heel and the forefoot engineering. When we're going from heel to midstance, it provides almost like a bridge support for your plantar fascia, so it gives the shoe a little bit more structure and integrity.

We're seeing a few brands veer away from this Trusstic support and going more full ground contact. I personally like full ground contact, but I know and have seen what this device does for that heel striker and it still has a place in this running shoe.

The Trusstic system provides a little bit more rigidity and support through that midstance phase for heel strikers.

As you come through the forefoot the rubber is a little bit thicker and softer. It’s blown rubber so it's going to provide a little bit of cushioning and flexibility on that forefoot toe-off. You've got three flex grooves through the forefoot. With the flex grooves it's not overly stiff and rigid and that's probably more to do with the change in the midsole which we'll get to right now.

However, the density has changed with the newer version and it has become a little bit softer. When you first put this shoe on your foot and you're comparing it to the GT-2000 8 from last season it is noticeably softer, even on that first step in.

When you take it out for a run the cushioning level has gone up a little bit as well. You're getting more impact dampening underneath your foot which is a nice change.

Through the forefoot though it creates more flexibility. That kind of sounds like I'm contradicting myself because you've got the exact same outsole from last year to this year with the rubber density, the flex grooves and the positioning.

Every intricate piece of detail in the outsole is the exact same but the flexibility comes from the fact that this midsole is softer. It's going to flex a little bit more through that last phase of your gait cycle. It offers more engagement to get yourself out of your toe-off phase.

While we're talking all things midsole we're going to talk about the heel-to-toe drop. In the men's you've got a 22mm heel and we have a 12mm forefoot for a variance of 10mm, so you get a 10mm heel-to-toe drop.

In the ladies’ it is so similar that it’s not funny. It's just a 1mm variance so you've got 21mm through the heel and 11mm through the forefoot for again a 10mm heel-to-toe drop.

Let's talk about the upper. Asics have changed a little bit regarding the structure and integrity of the upper.

First things first, let’s talk about the heel counter. When we're looking at the heel counter of the GT-2000 8 and GT-2000 9, to the naked eye there's not a lot of change. The actual depth and height are similar in terms of what you feel around the back of your heel.

You have an internal heel counter device which is going to give the foot a nice, strong hold for that first point of contact with the ground. When your foot comes down and hits the deck, you want to get as much cushioning protection underneath the body as you can, but you also want to make sure that your foot isn't going to move around on the platform. That's what the internal heel counter structure will do.

When we're talking about the depth and the width it's good to have that variety on offer because we can really dial in for specific foot shapes and that's what I like about brands that call out widths.

The Asics GT-2000 8 had a little bit more wriggle room through the toe box which I'm sure some runners out there loved but obviously Asics have gone back to the drawing board and just ever so slightly secured that fit more through the forefoot.

There might be some people out there that prefer the fit of the GT-2000 8 and that's going to happen from time to time. Brands change but I firmly believe that this fit in the upper of the Asics GT-2000 9 is a lot more dialled in than what it was in the previous version and it fits pure to the foot.

I really like how this shoe rolls regarding the other construction. It features a lightweight and breathable engineered mesh. On those warm or hot days, you can get plenty of ventilation through your foot which is going to minimise the impact of swelling and moisture build-up within your running shoe.

The structure and integrity around this toe box is obviously a topic of discussion and it has been for years and years with running shoes and brands having some component of the upper that's not going to wear with quite as much durability.

Asics and other brands have gone back to the drawing board and they've really secured and tightened up the engineering around that toe box region. It's a secure and strong structure to get you through the whole life of your running shoe.

There we have it, that is my take on the Asics GT-2000 9. One thing I will call out is there's going to be several colour options over the next 12 months, there always is with popular running shoes.

Although there is a variety of widths with four widths in the ladies’ and three widths in the men's, there is going to be some restrictions on those widths with regard to what colours they come in. They will be on our product links below and the Asics GT-2000 9 page.

I really like what Asics have done with this shoe. The Asics GT-2000 over the years has always been your consistent shoe. It's like your favourite spaghetti bolognese, it doesn't really change too much from year to year, but I was really excited to get this one to market because I like what they've done with the midsole.

I like the fact they've made it marginally lighter and softer. It's certainly going to be a little bit more comfortable on your first wear of your new GT-2000.

It is a mileage shoe and it's not as cushioned as the Asics Gel Kayano, but it's certainly going to play to that runner that wants enough protection underneath their body and is looking for something potentially a little bit lighter to pick up the pace on some of those shorter runs as well.

Kudos to Asics for going back to the drawing board and ever so slightly tweaking with the engineering of this shoe but staying true to what the GT-2000 wearer is all about.

It’s a great update and hopefully this has given you enough information at home to maybe throw it into your running rotation.

If you haven’t done so already, please subscribe to the Sportitude YouTube channel. If you have any comments, questions or queries on this specific running shoe please contact our Sportitude shoe experts.

If you've ran in it or if you've tried it and you've got your own feedback let us know. We love to hear from all of you at home with regards to your running shoe preferences and choices.

Until next time guys, stay safe and happy running. We’ll see you on the road, take care.