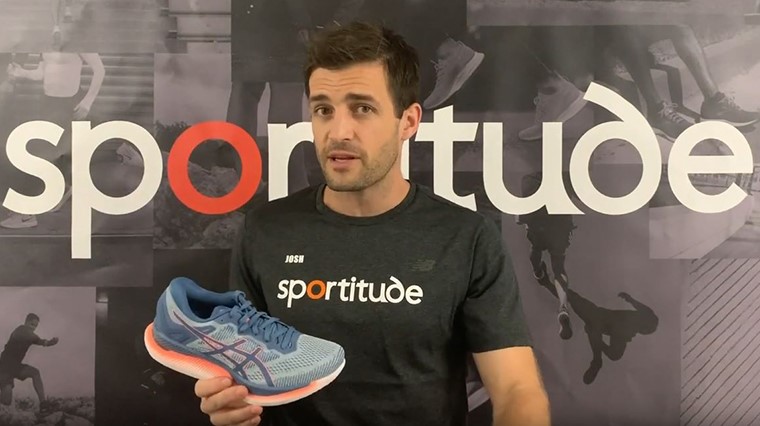 It features a durable and structured engineered mesh upper that offers plenty of ventilation for coasting over long distances. A deep internal heel counter secures the heel in place like a seatbelt to provide support for heel strikers while offering a smooth, irritation-free fit.

Runs made effortless, the Asics GlideRide lives up to its name with a specialised rocker sole for ultra-smooth transitions. It's not recommended for forefoot strikers but if you’re a heel striker or midfoot striker, this innovative design lets you glide from impact to toe-off with reduced effort and less stress to the forefoot.

Hello everybody, this is Josh from Sportitude and it’s shoe review time. We are doing it on the Asics GlideRide available in women’s and men’s.

It's a completely new shoe from the Asics running family. There is a lot about this shoe that isn’t the norm in regard to what you would classify Asics to be renowned for over the last 5 to 10 years.

The reason being is that this shoe is on a lower drop, it’s got a rocker sole, it has a completely new configuration in how they’ve engineered the upper and they’re targeting probably a new customer or a new runner that they haven’t really gone after over the last 5 to 10 years. In doing so, they’ve packed it all into this shoe here.

There’s a lot to get through in this review and like all my reviews we’ll talk all things outsole, midsole and upper and also profile the runners that should be considering this shoe, one on pace and the other on what specific foot type or foot posture. Without further ado, let’s get stuck in.

Let’s talk about the outsole of this shoe. It’s a unique set-up in the sense that Asics have used the same rubber the whole way around the shoe. Usually with a mileage shoe, they will strategically place harder wearing rubber in high impact areas. More often than not that will be down in the heel region and a little bit up towards the midfoot as well.

Asics have used the same density of rubber at the back of this shoe right through to the forefoot. The reason they’ve done that is because the rubber doesn’t play a huge part in the transition of this shoe. The transition of this shoe is all taken care of with the midsole. But talking all things outsole, you can see there is a big cut-out through that vertical line. Asics have taken the midsole out of that component of the shoe because one, it reduces a little bit of the weight and two, it helps this GlideRide board do the magic.

In between those two midsole technologies they have an EVA board which is essentially their GlideRide technology which is creating the rocker sensation in this shoe.

The midsole is built on a pretty generous stack height and you can see it is quite a way off the ground. It’s a 5mm heel-to-toe drop in both men’s and women’s. The difference between the two is 35mm in the heel to 30mm in the forefoot for obviously a variance of 5mm.

The shoe also has a Gel cushioning pod at the back. To be completely honest and fair, that Gel pod isn’t going to change the way your heel hits the ground. It’s literally there to highlight and call out Asics’ patented technology, being Gel cushioning. There is a little slit in the back of the heel that creates a touch extra cushioning and comfort.

Talking about the midsole, the traditional thought pattern around running shoes is that foot types roll in and overpronate, are neutral or underpronate and roll out. This shoe doesn’t try to manipulate how the foot sits on the horizontal plane. They’re actually trying to encourage a smoother, more efficient transition through the gait cycle.

Asics have done that with the rocker sole. When you’re coming down the heel on the lateral side, from heel to midfoot there isn’t much variance from the traditional running shoe. However, once you get from that midstance point from midstance to toe-off there’s quite a bit of change. This shoe has a very smooth, very effortless feel on toe-off. That’s purely and simply because that rocker sole feeling through the forefoot. It takes a lot of stress and load off those metatarsal heads. The end of your toes don’t have to work as hard.

We’ve done testing with this shoe in our lab using technology called RunScribe. One piece of cool data we can track is the angle of your foot as it goes from midpoint to toe-off. Across five different runners, and I know it’s not a huge data bank of runners, but this shoe on average reduced the angle by 4 degrees.

4 degrees is huge in regard to that forefoot transition. What that is going to do for a runner is not necessarily change the way they’re going to run on shorter, quicker runs but it will certainly make their longer runs a lot smoother and easier. A lot less effort is going to be applied through that toe-off phase in their gait cycle.

We’ve talked about all the magic of the midsole, let’s talk about the upper. It has an engineered mesh. There’s nothing new about this upper that I’d love to harp on about but it’s a very nice executed upper. You’ve got that breathability which is fantastic, so you’re going to get plenty of ventilation through the shoe on warmer days or when you’re spending longer periods of time out on the road.

It’s not by any means a thin design because it needs to be nice and strong for mileage runners. The upper itself is structured and strong. You’re not going to feel restricted too much inside this shoe.

Width wise though, that’s the big one. It’s only in B width in the ladies' and D width in the men’s, so just a standard offering at the moment. Who know, Asics might venture out in the next couple of seasons and design a couple of different width options in this shoe but with the first launch of a specific shoe like this, they’ve just gone with the standard widths.

One thing I’d like to touch on about the upper is the internal heel counter at the back. Because this shoe is still engineered for a heel striker, they’ve executed extra heel support by offering an internal heel counter which is one, nice and deep and very secure at the back of your heel and two, a really soft lining on the inside so the collar of this shoe isn’t by any means harsh. It’s not too soft and it’s very smooth and doesn’t cause any irritation or rubbing at the back of your Achilles and heel. With the additional lacing loop, you can go back one more eyelet than you could traditionally to lock that heel down a little nicer for a more secure fit on your longer runs.

Let’s talk about the profile of runner which could use the GlideRide for their long distance running. This shoe is not designed for speedwork, no surprises there. It’s not a shoe that you would slip into your running rotation and use for your tempo runs or race day if you’re looking to increase your speed. This shoe is designed for long runs and increasing your comfort level during those long runs.

I don’t want to sit here and say what minutes per kilometre would fit inside this shoe. Just know it is designed for a heel to midfoot striker looking for a nice smooth transition through their gait cycle. If you’re a forefoot runner I don’t think this is a shoe you should consider. The reason being is you can see how the shoe does bow up through the forefoot with the rocker sole.

For a forefoot runner, they're going to be hitting the ground with a very restricted line of contact and it’s not overly comfortable. We’ve tried it ourselves and it’s OK. It’s not the worst shoe by any means but it is not what this shoe is designed for. This shoe is designed for a heel or midfoot runner who is going to require more comfort and more assistance on toe-off in their gait cycle.

Let’s also profile the actual foot type that can sit inside this shoe. If you’re a heel striker and you come through midstance and you overpronate so your foot rolls in over that medial side, I’d put a question mark on whether this shoe is going to be suitable for you. The main reason being that there’s quite a big cutaway on the medial side, and also you can see the width of the shoe through midstance isn’t that generous.

If you are a neutral runner, so there’s not a lot of overpronation or underpronation (supination), this could be a shoe you could consider.

There you have it, the Asics GlideRide. A completely new take on how you can fit a neutral mileage running shoe. It has phenomenal technology, is a very comfortable shoe and something you could potentially consider being a neutral runner and looking for a high mileage shoe for extra comfort.

If you haven’t yet subscribed to the Sportitude YouTube channel, please do so. If you have any questions, comments, queries or want to let us know how you’ve gone with the GlideRide, contact our Sportitude shoe experts.

Until next time, happy running.