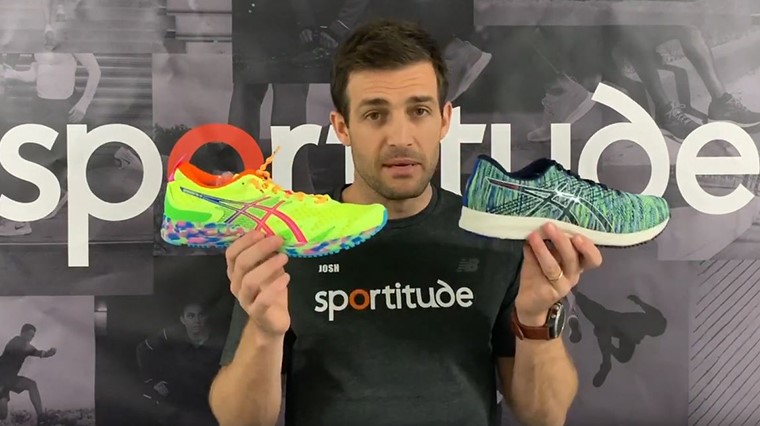 Josh reveals the eye-catching Asics Gel Noosa Tri 12 running shoes and weighs in on how they provide a fresh spin on the Asics Gel DS Trainer 24.

Triathlon-ready features like elastic lacing allow you transition quickly and smoothly between bike and road running on race day. A breathable jacquard mesh upper provides a light, barefoot-friendly ride, allowing heat and moisture to escape and reducing the risk of irritation between foot and shoe if you choose to run sockless.

Unlike the DS Trainer 24 which features a DuoMax support system for a touch more support and guidance, the Noosa Tri 12 is built on a neutral platform with a consistent density on the medial and lateral side. Lightweight FlyteFoam cushioning cradles your feet, creating a responsive ride that’s soft in all the right places for comfort over the competition.

Hey guys, Josh from Sportitude here and we have a bright shoe review on the Noosa Tri 12. I’m holding the men’s in my hand and now I’m going to introduce the ladies’.

I love what this shoe stands for. It’s a bright take on the DS Trainer essentially. To give you a bit of a background if you’re not familiar with the triathlon here in Australia, the Noosa triathlon is in the early part of November every single year. Asics for a number of years have executed a shoe that’s been marketed for that triathlon.

Asics haven’t engineered a completely new shoe like what they did with the Noosa FF. They tried to change what the Noosa triathlon shoe was for a couple of years and they executed two different seasons or two different varieties of the Noosa FF, which stood for FlyteFoam.

Asics had a shoe which was on a 10mm offset with almost full ground contact on the outsole, but it wasn’t really hitting the market as well as the old series of triathlon shoes were. So, they went back to what they had previously and made the Noosa Tri off their DS tooling.

We’re going to discuss the similarities between the DS Trainer 24 and the Noosa Tri 12 and show how they are similar. If you’ve ran in the DS Trainer and like that but want something brighter, you know what to do.

First things first, you don’t need to be a triathlete to run in this shoe but it does have a couple of triathlon benefits. You’ve got quick tie laces for that transition to get off your bike and onto the road as quickly as possible, but they do come with traditional laces as well. You can take the elastic laces out, put the normal laces in and it’s going to give you nice support for a mileage feel.

The shoe is engineered on a neutral platform. That is the main difference between the Noosa Tri 12 and the DS Trainer 24. You can see what is written on the the medial side of the DS Trainer 24, the trademarked DuoMax support system.

It’s not a crazy amount of support that you’re going to get with this DS Trainer. It’s ever so slightly mildly executed on the medial side to provide a bit of guidance. It’s not as supportive as the 2000s and the Kayanos out there. Don’t be fooled by the word DuoMax. It’s just got a little bit of support on that medial side.

The Noosa Tri does not have it. It is the same density on the inside as it is on the outside, using the FlyteFoam midsole technology. It’s nice and light and soft where you’ve got that impact area. The whole idea behind this shoe and the DS Trainer is it is light and responsive.

That’s exactly what you get out of the Noosa Tri 12 because when you get off your bike and you’re in T2 and you get onto the road, you don’t want to be weighed down by a running shoe. It’s nice and light and very responsive.

Let’s dial in to what the Noosa Tri 12 has done in the execution. Let’s talk about the outsole and compare it to the DS Trainer 24. You can see other than the colour, it is exactly the same outsole. They have a horseshoe configuration which is going to give you extra propulsion for toe-off. The outsole has a slightly harder wearing rubber on the heel for that heel striker.

However, the majority of runners that run in this shoe more than likely, especially at triathlon, will want to run a little faster and will be hitting through the midfoot region. As you can see, there’s full ground contact on that outsole, so it’s going to be nice and plush. You get a great purchase with the ground as you go through impact to toe-off.

Let’s talk about the midsole. It’s FlyteFoam and like I said before, it’s a lightweight cushioning system from Asics. There’s a Gel pod in the heel and FlyteFoam midsole the whole way out. However, there’s obviously no DuoMax on the medial side.

Coming through to the upper. First things first, it’s insanely bright and colourful. There is going to be a lot of colours in the Noosa Tri 12 for the first half of 2020. On the Asics Gel Noosa Tri 12 product page you’ll see all the colours on offer in both men’s and women’s.

I will touch on one very important topic. It’s that there is only one width in men’s and women’s. It’s available in B width in the ladies’ which is standard, and D width in the men’s which is also standard.

Like I touched on before, the cool thing about this running shoe is it has those triathlon add-ons. The little loop through the tongue and the pull tab at the back lets you get your shoe on as quickly as possible.

It’s an insanely breathable upper, so much so that it’s different from the DS Trainer 24 which has a knitted design. It’s a great design and still nice and breathable as well. However, when you look at the execution of the upper in the Noosa Tri you can see it has the jacquard mesh which is a open breathable mesh with plenty of ventilation through the foot, so it’s going to keep you nice and cool.

The reason they went a little lighter with the mesh is because a lot of triathletes are going to run this shoe barefoot. We want to get extra ventilation because there is going to be no protection between your skin and the actual materials of the shoe itself. The seamless execution is vitally important but also the additional breathability to keep that foot nice and dry, or as dry as it possibly can be.

There you go guys, the Noosa Tri 12. It’s a phenomenal shoe. I love what they’ve done and it’s a lot of fun. It’s not a shoe for everyone, I completely understand. However, if you’re the type of person that wants to be seen, give it a crack.

If you haven’t subscribed to our Sportitude YouTube channel please do so. If you have any questions about this shoe, any other shoes or any comments please contact our Sportitude shoe experts. Until next time, we’ll see you out on the road.