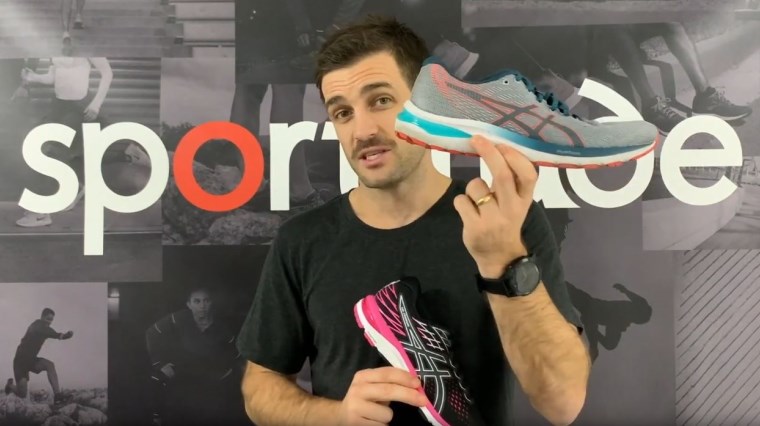 By putting runner feedback into play, Asics have made significant improvements in this next generation that partners seamlessly with runners that have an efficient gait cycle. It’s lighter, softer and smoother while keeping true to the profile that loyal Cumulus fans gravitate towards for their daily training and high mileage running.

In this latest evolution, the full ground contact outsole amps up the flexibility – translating to smoother transitions from midfoot to toe-off and a more effortless run.

It’s engineered for the road warrior seeking a balance of lightweight protection and responsiveness. FlyteFoam cushioning dampens impacts and fights off fatigue on longer runs, without compromise to the snappy rebound effect for an energised feel.

A soft lining hugs to your foot without being restrictive or suffocatingly plush and a supportive heel counter allows this top running shoe to move harmoniously with your feet free of heel slippage.

Hey guys, Josh here from Sportitude and it is shoe review time and it's going to be on none other than the new and improved Asics Gel Cumulus 22. This shoe has had some serious upgrades and there’s a lot to like about it.

Like I do with all my reviews we're going to talk all things engineering, covering the outsole, midsole and upper. We are going to talk about the runner that could be considering this shoe from reference to their foot type and what type of cushioning system is on offer.

We’ll identify whether you can slip it into your shoe rotation for long distance, quick tempo runs etc. We're also going to compare it to where it was with the Asics Gel Cumulus 21 and highlight the changes. There’s a lot going on and I’m looking forward to this review so let's get stuck in.

I’m going to hold up the Cumulus 22 and this is the shoe I’ve being doing wear testing in. I was lucky enough to get a pair from Asics about four months ago, so I've had this shoe for quite a long time.

I had to go for a run earlier just to refresh my memory. I put 50km into this shoe a couple of months ago which is around 30 miles to get a good read on what it's all about. I took it for some longer runs, slower runs and tempo sessions.

I've got to be honest, there is a lot to like about this shoe in comparison to its predecessor the Cumulus 21.

Firstly, I’m going to profile the runner that could be considering this shoe. It’s a neutral running shoe, meaning on the medial side there's no additional support system like dynamic support systems in play.

It is the same density on the medial side as it is on the lateral side. Therefore, we’re talking about a foot type that tends to stay relatively neutral throughout their gait.

This may refer to a foot with high arches or a neutral foot type with a static position and possibly a flattened-out arch yet doesn't favour the medial side through their transition. They stay nice and balanced and potentially toe-off at the second or third metatarsal.

The Cumulus 22 is orthotic-friendly. The sockliner comes out and the orthotic goes in so if you are a runner that does have an orthosis you can comfortably put it inside this shoe. You may have to tinker with the runner’s lock lace just to keep your foot nice and secure with the extra elevation in your heel lift with your orthotic.

What we have in the outsole is full ground contact. Nothing has really changed from what they did with the Cumulus 21. There's a rubber outsole the whole way through to the forefoot.

The biggest change is in the flexibility of this shoe. You can see on the outsole of the Cumulus 21 you have three flex grooves in the forefoot if you combine the little flex groove with the two-third flex groove.

It was OK, it was a real crack at a stable neutral shoe from the Asics family. For me it wasn’t a bad shoe, it ran OK but according to feedback it was a little bit too stiff and potentially too dense in the midsole.

They've gone back, listened to the runners out there and changed the way the Cumulus 22 is going to perform. For the Cumulus 22, what you have in the outsole set-up is five flex grooves right through the forefoot.

Straight away, this shoe is going to flex a lot more during midstance to toe-off. It's going to have an easier ride for that runner.

The density of the rubber hasn't changed. It features high-impact rubber through the back of the heel for heel strikers, and if you happen to be a midfoot runner like myself you're going have a consistent, plush purchase with the ground.

Coming through to the midsole. Technically you have your FlyteFoam technology in the Cumulus 21 and the strategically placed Gel cushioning underneath your heel as well as Twist Gel through the forefoot.

It’s the same thing with the Cumulus 22. You have the strategically placed Gel cushioning at the back of the heel and Twist Gel underneath your first metatarsal in the forefoot.

However, the density of foam and the weight of the foam has changed. They've lightened the foam underneath the foot and made it a fraction softer as well.

When you get that first feel and step inside this shoe it feels more compliant, it's softer underneath the foot. With the weight reduction and the midsole it's a nice combination of cushioning and that lightweight, responsive feel throughout the forefoot.

The Cumulus 22 caters to the runner that potentially wants something that's cushioned enough and offers a slightly more responsive ride.

When we’re looking at that style of shoe it potentially suits someone with a higher cadence or a really efficient running gait cycle. It’s someone that’s probably picking up the pace and wants more of a responsive, snappy feel underneath the foot but with that protection element and not sacrificing too much to get that weight reduction. That’s where the Cumulus 22 sits in the whole scheme of things.

It’s a relatively generous offset of 10mm in the whole scheme of things. We can go up to a 12mm and 13mm with some running shoes but often we're seeing around an 8 - 10mm heel-to-toe offset with the vast majority of running shoe brands. They’ve stayed consistent to where it was previously.

They’ve tinkered with the midsole regarding the weight and the density of foam so it's a bit softer. However, they've kept it a very similar feel regarding the heel-to-toe pitch which is a good thing to do from Asics. You don't want to tinker with it too much and change the whole static position of the offset for a Cumulus runner.

Coming through to the upper. Other than the midsole it’s been my favourite feature in this shoe because I liked how it felt on the foot. There are no restrictions that hugged me in areas that felt too tight.

It has a slightly more rounded toe box. Therefore, through the front half of this shoe the toes have a little more space and wriggle room on offer which is great.

I happen to be holding the D width in my hands and it’s true to size and width. I've been happy with how that felt. From time to time I run in a 2E width, it just depends on the manufacturing of the shoe. I would classify myself as a D width and this fits true to size and true to width. A 9US D fits me perfectly.

We have a D, 2E and 4E width on offer for men's. With this shoe in women's the D width has been the most popular width globally, so they’ve stuck with it. They've had to unfortunately pass on the B width and a lot of it had to do with manufacturing a colour specifically for the Tokyo Olympics.

It was a bit of a marketing play from Asics and that has been pushed back. We might see the B width coming to the later half of 2020 but in terms of the widths on offer, they have a D and they have a 2A for women. They’re catering to the really narrow foot and someone who wants a little bit more generosity as well.

As I touched on, it features a secure fit up top. It’s nice and free through the toe box and I like the amount of wiggle room.

The lining on the inside is a huge improvement from what they had with the Cumulus 21. The Cumulus 21 had a lot of foam and I think it went down the path of trying to provide too much comfort.

You can always play around with your runner's lock lace and get that heel lock system going to get that really secure fit.

However, I like what they've done with this heel counter. The internals are nice and strong with plenty of support in the back but the comfort factor on the inside of heel counter is spot-on so well done to Asics.

There you have it, I reckon that is pretty much all I can do with this shoe. It is a very comfortable shoe as I touched on. It's for the runner that wants a fair bit of protection underneath their foot but by no means are they leaning on heaps of cushioning. They really like that responsive feel through their gait cycle.

It's a perfect combination. It's a bit like the Brooks Ghost to be completely fair. It offers great cushioning and a nice, responsive feel.

There you have it guys, the Asics Gel Cumulus 22. I love this shoe.

Please subscribe to the Sportitude YouTube channel if you haven’t done so already. If you have any comments or questions on the Cumulus 22 please contact out Sportitude shoe experts.

Until next time happy running and we'll see you on the road. Take care.